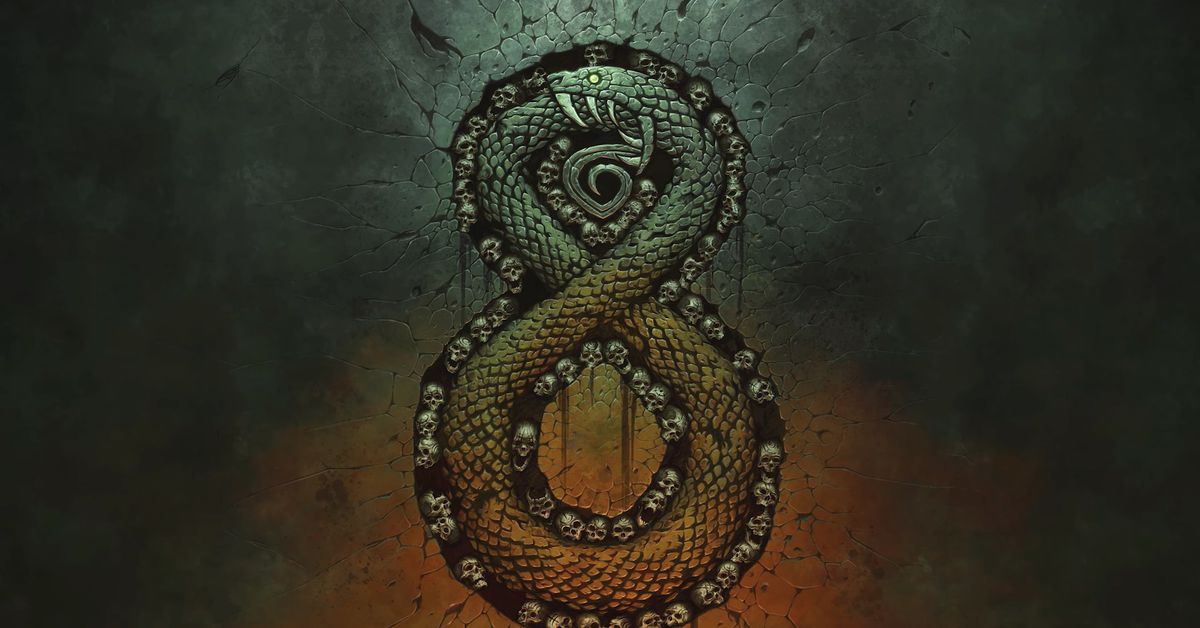 Chris Metzen and Mike Gilmartin are former executives at Blizzard Entertainment who helped bring the world’s Warcraft, Diablo and StarCraft to life. In 2020, after Metzen wrapped up a 22-year period at Blizzard, they announced a new company called Warchief Gaming. Now they are ready to announce the company’s first project.

Together with lead developer Ryan Collins, a former game designer at Hearthstone, they make Metzen’s home-brewed Dungeons & Dragons campaign – one that began with childhood friends in the 1980s – a version compatible with the modern 5th edition of D&D. Warchief̵

7;s setting is called Auroboros: Coils of the Serpent. The first source book, with the title World Book: Lawbrand, will be brought to life through crowdfunding.

The modern incarnation of development and evolution takes place in the Faerun world, also known as the forgotten kingdoms. It is a world of high imagination, filled with wild wilderness as well as busy cities. Auroboros takes place in a world called Drastnia and is far more urban.

“Lawbrand is an association of urbanized commercial cities,” Metzen said in an interview with Polygon. “There are eight or nine of these trading towns, and they are all touched by this great new trade. It’s almost like an industrial revolution. ”

Key art for the trading towns shows busy towns packed with houses and factories. Light shines along delicate bridges while large merchant sailing ships plow through the bays and down deep rivers between the mountains. In one piece you can see the working class stepping home after a long day at the factory.

“All the races live together in these big cities,” Metzen said. “The Ogre neighborhood is down here, the dwarves live here, the people are here. We all work in the same factories, our children go to the same schools, there is a superior church that monitors everything and creates consistency and order in this new society. “

But lurking in the background of it all is a powerful magic driven by mysterious tattoos.

“Auroboros itself […] is like a cancer of origin, ”said Metzen. “The more you use it, the more you go into this power that is apart from your actual class skills. It begins to cause madness and death. It’s like the classic rock star – that Jim Morrison exaggerates. ”

Where regular 5th Edition D&D campaigns can get stuck in low level battles, Warchief’s attitude will give players incredible powers quite early on. By utilizing this raw power, at least one player figure in the party will be able to do incredible things. They could turn cities into stone, freeze whole seas or even mountains with their wrists. It will be up to the group’s Dungeon Master (DM) to roll with these battles.

But it will also be the other characters at the table to deal with the aftermath – and to help prevent a player from running away with the story.

“We include essays in the book, and try to anticipate some of the issues that may arise between the players,” Metzen said. “‘Why does Johnny get all the attention as the snake-marked character? What about me? I want a compelling story. ‘So we go through all these scenarios where DM can find themselves in dealing with such situations and provide guidelines for how to deal with the rest of the group.

Metzen said that, more than anything else, he and his team like to take their personal home-brewing attitude and turn it into something for the rest of the world to enjoy. But why not create a system of rules to follow it? Why choose to use modern development and development – or at least parts of it that are open source and accessible to the public – as basic building blocks?

“This whole idea came from me and my friends who built this world for Advanced Dungeons & Dragons,” Metzen said. “Throughout my life, it feels like a church. D&D is a sacred reason. This is where we learn to imagine together. […] Building this thing to 5th felt completely natural. ”