The latest Google app beta (v8.14.12) repeatedly crashes too many on Android P 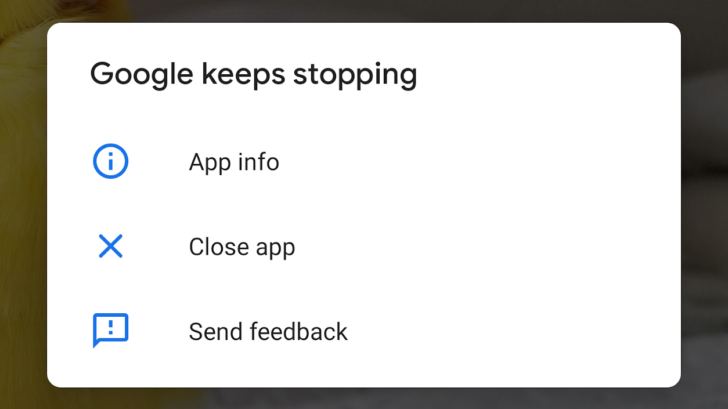 Preview developers are not always the most stable, and they are not meant to be. They are the process where a stable is created. Because of that, it's sometimes possible to run into some issues when they use them, and it seems that many people run a repeating force near the latest version of the Google App beta (v8.14.12) on Android P .

Offensive update started rolling out yesterday and it's not a simple case to have sideloaded wrong version. The problem manifests a repetitive force near the Google app, and reports seem to indicate that the issue mainly affects them on the latest Android P DP5 preview. The dialog that appears when the app continues to crash as part of the problem is depicted just below.

So far, the only solution seems to roll back to the stable version of the app available here, thanks to the nice and exceptionally virile people at the APK Mirror (that's us). If you opted for beta, it means you either need to disable updates for the app for a short while or temporarily remove from the beta until the problem is resolved.

None of our own phones seem to be affected by this problem. There is some presumption that the problem is due to being paired with a Wear OS clock, but even those of us who use one have not experienced it. Personally, the beta version of the app has crashed for me on my Pixelbook, but none of my Android P devices are affected, so it's also possible that the problem will be a bit longer than just for the developer's previews.