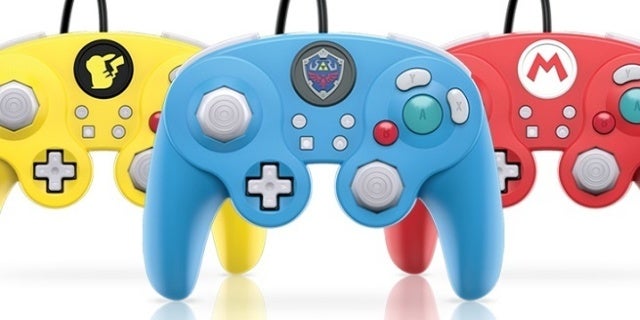 The Nintendo Switch is getting some special Super Smash Bros. Ultimate -themed GameCube-style controllers to give Smash players one of the most preferred ways to do battle.

These are not the first GameCube controllers that we've seen for the Switch, let alone ones that are being prepared in preparation for Super Smash Bros. Ultimate but they will still likely be in the hands of many Smash players when the game releases later this year. The controllers are made by PDP, a third-party company that makes all kinds of Nintendo accessories, the newest of which are the GameCube controllers that feature different characters from the Smash series. Several of the controllers were shown in a blog post on the site with blue, red, and yellow controllers featured for the Zelda Mario and Pokemon brands, respectively.

"Gear up for battle in Super Smash Bros. Ultimate for Nintendo Switch with our brand new Wired Smash Pad Pro! "The post from PDP says. "Team up with your favorite character and challenge your rivals with this GameCube Inspired Pro Controller."

The controller also offers different gameplay options that will allow players to customize their controllers in some way. The C-Stick that is normally found on a GameCube controller can be detached from the device and replaced with a normal analog stick depending on which layout people prefer.

"One of the coolest features is the ability to customize your gaming style by playing med den traditionelle C-Stick eller bytte den ut for en full-size stick. The innovative detachable stick design lets you experience the original GameCube style of play! "

As the name suggests, this controller from PDP only comes in a wired option, so you will not be playing Smash from any tremendous distances. It comes with a comfortable 10-foot cord though, so Smash Players should still have ample room to work with.

Super Smash Bros. Ultimate is scheduled to be available for the Nintendo Switch later this year on December 7.