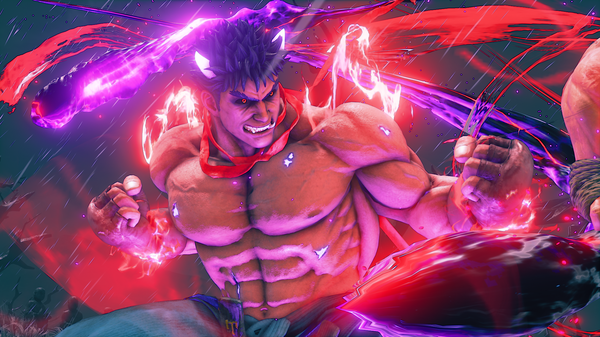 Somewhere between Ryu and Evil Ryu.

Street Fighter 5: Arcade Edition is getting a new character in the form of Kage, a dark force tied to the sinister aspects of Ryu's soul.

Announced by Capcom, Kage is Ryu's Satsui no Hado ("surge of murderous intent") and only desires to survive, destroy and conquer. For reference, Akuma gave in his Satsui no Hado, though Ryu is constantly struggling to keep his at bay. If Ryu had kept his Satsui within him, he would have turned into Evil Ryu. Kasta's move set, however, became a sentimental and became Kage ("shadow") and lives to prove that Ryu is nothing without him. To do so, it seeks to challenge Akuma and Sagat, two of Ryu's greatest rivals.

Kage's V-Skill, Senha Kassatsu, sees it gathering energy into its fist to lung forward to punch its opponent , the two-bar V-Trigger I, Taigyaku Mudo, unlocks Ashura Senku, a teleport move that can be used as a dash which opens up multiple mix-up combo options. Its three -bar V-Trigger II, Rikudo Osatsu, see Kage unlocking Misogi, a move that "sends him into the skies before crashing down on the opponent."

Lastly, Kage's critical arts are the Metsu Shoryuken, a version of Ryu's iconic super that does a powerful uppercut that ends in a full flash or red on the screen, and Shun Goku Satsu, which is only available in V-Trigger II, and uses Kage's version of the Raging Demon to end specific combos.

Kage is now available for $ 6 USD, or 100,000 Fight Money. This will come along with balance changes and new moves for certain characters. Kage is the beginning of the fourth season of Street Fighter 5: Arcade Edition, more of which will come in 2019.

For more on Street Fighter 5, check out how fans are reacting to the game's new over-the-top optional in-game advertisements, and read about new fighters that have been aded to its roster.