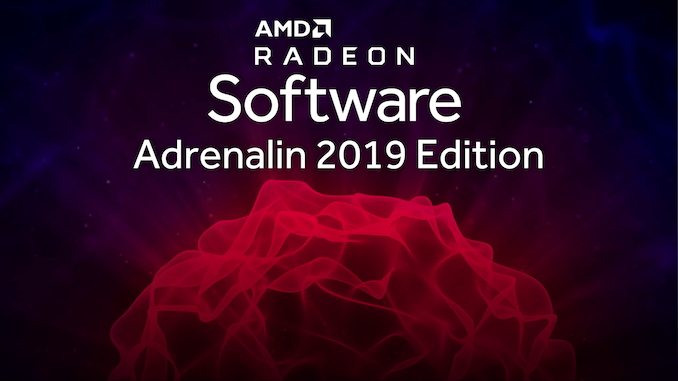 As 2018 winds down, once again it's time for AMD's annual major feature update for their graphics drivers, Radeon Software. Going by the unassuming title of 'Radeon Software Adrenalin 2019 Edition', today's release is more of an evolution on last year's Adrenalin Edition, bringing improvements and further integration with AMD Link and Radeon Overlay. The headlining feature is the new capability to game stream to a mobile device or VR headset, powered by ReLive and AMD Link. AMD is also addressing highly-demanded user requests as collected on their feature voting and feedback page, now checking 7 out of the top 10 requests.

For those just catching up, AMD's cadence of an annual big bang driver update started in 2014 with Catalyst Omega, following up with the introduction of Radeon Software in 2015 and its inaugural Crimson Edition, and subsequent annual updates with Crimson ReLive Edition in 2016 and Adrenaline Edition in 2017.

This contemporary approach has hotfixes and performance updates occur throughout the year, punctuated by major feature updates and revisions, with overall emphasis on user experience (UX) and quality assurance. 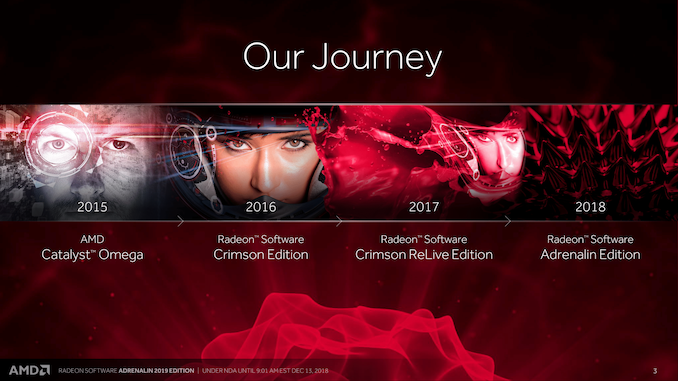 The consistency of the UX is clearer with the latest discrete GPUs, but the same could not be said of AMD's APU offerings. On that note, recent complaints about the status of outdated Ryzen Mobile drivers led AMD to release a statement on the matter. Adrenalin 2019 Edition does not bring any changes on that front, and AMD has nothing to add to their original statement.

The new developments are however far from being irrelevant, as these annual feature updates, better zero-day game support, and cited stability metrics began as a move to spell off the reputation of older AMD / ATI drivers. More directly, a consistent UX presumably also incorporates mobile APUs as well, especially since OEM vendors would have little interest in being involved in that aspect. A meaningful percentage of mainstream users will continue to have their experience with AMD drivers solely dictated by OEMs and without the ability to leverage AMD's improvements in their driver development strategy.

Elsewhere, there are no official updates on Radeon support for hardware-accelerated DirectX Raytracing, but with NVIDIA's recent launch of Turing-based GeForce RTX series, it's a topical theme.

Looking forward, there will be increased competition in the GPU space, and a lot of AMD's incumbent advantages will be in software / driver maturity as well as feature support. With Adrenalin and now the Adrenalin 2019 Edition, there has been a good deal of increased emphasis on streaming / social uses and mobile devices, and over the next pages we will take a look at the specifics of each of the new features. [19659009]
Source link