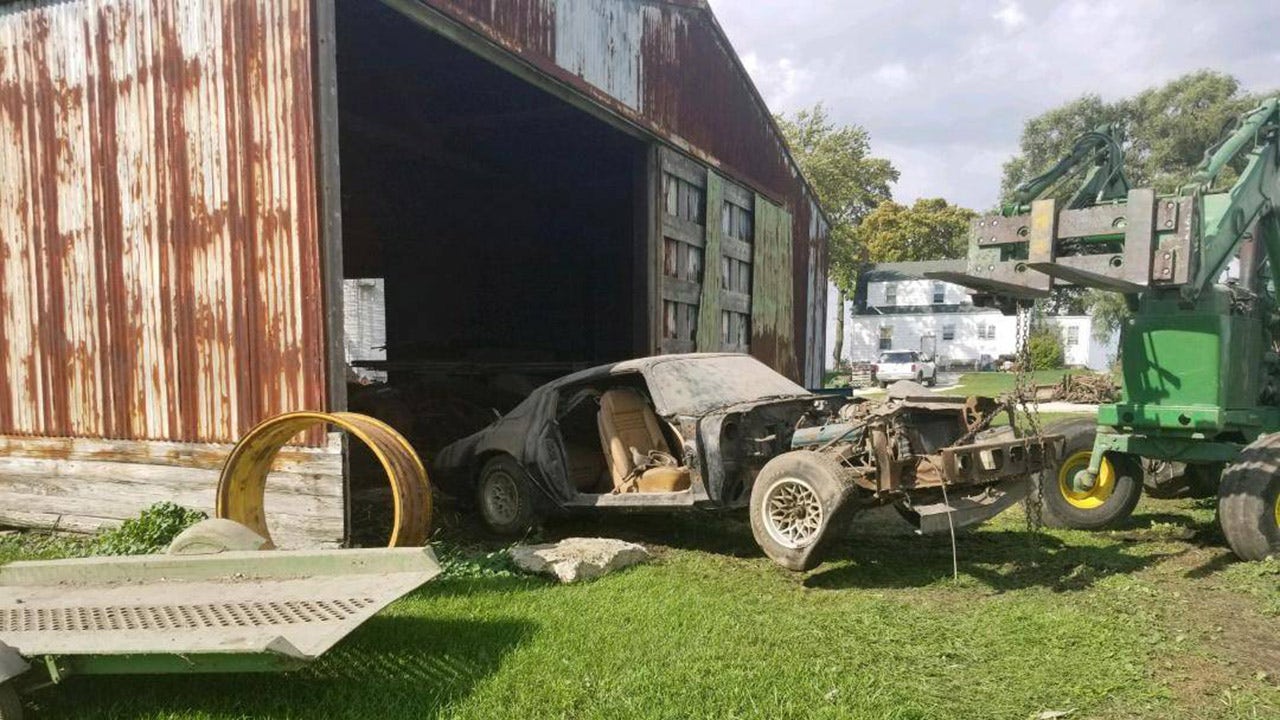 The classic car world was shocked last year when one of the two missing Ford Mustangs used to make the 1968 Steve McQueen thriller "Bullitt" was accidentally discovered rotting away in a junkyard in Mexico, where it had been sitting since … well, no one knows exactly.

It was a once-in-a-lifetime movie car moment. At least until this last January, when the secretive owner of the other Mustang – the "hero" car McQueen drove in all his close-up shots – pulled it out of storage for the first time in decades to help celebrate the 50th anniversary of the movie.

The iconic green coupe has been blowing away fans on a world tour of car shows ever since. But now a car that was literally blown away in the last movie McQueen ever made has been unearthed from an Illinois child, and it has got a great backstory of its own.

It's a Pontiac Trans Am was featured in the 1980 movie " The Hunter, "in which McQueen portrayed real-life bounty hunter Ralph" Daddy "Thorson, who was credited with tracking down over 5,000 criminals during his career. The movie debuted just three months before McQueen's untimely death at age 50 while being treated for cancer.

In its most memorable scene, Thorson rents the Trans Am from a small airport and drives it to a farm where the fugitive Branch brothers are hiding . As he searches the property, they start throwing color dynamite at him, steal the car and try to get away. Thorson then jumps in a combine harvester and chases them through a cornfield, before they accidentally drive over one of the dynamite sticks as it goes off, splitting the car in two. Cut to Thorson returns to the airport with the remains of the Pontiac and the injured Branch Brothers on the back of a flatbed truck.

Although the scene was set in Nebraska, it was filmed in rural Kankakee, Ill., and was a big to-do among the locals. Much of them spent their days hanging around the sets and making friends with the crew, including a farmer accused by Harold McQueen.

McQueen told writer Jim Suva that the director ended up destroying two cars after he was not happy with the first fog. One was a loaner from Pontiac, the other a last-minute purchase. He was hired to cart the wrecks around, and it's his truck that appears in the movie arriving at the airport. The production company let him keep the car from the first take as payment, and he put it away in his child, intending to fix one day, but never did. The other junker ended up in a scrapyard, while five others that were on loan from Pontiac were returned intact and presumably disposed of because they were promotional vehicles that were not legal to be sold.

Soon after this, a neighbor named Stan Harvell , who knew about McQueen's Trans Am, moved to Arizona, where he eventually became a classic car collector. Earlier this year, he decided to give McQueen a call to see if he had still had the car and if he was interested in selling it. He did, and after some back-and-forth, McQueen agreed to let it go this past October.

Harvell brought a friend in on the deal called Calvin Riggs, who runs Carlisle Motors, a Houston area classic car restoration shop and dealer. Riggs specializes in Trans Ams and once owned what's believed to be one of the menacing black Dodge Charger stunt cars from "Bullitt," which made him an ideal partner.

Riggs tells Fox News Autos that he's up with Harvell at McQueen's , where the dusty Trans Am was hidden behind all sorts of junk in the back of the child. It still had some of the chains and hooks and other equipment that were installed by the stunt team on it, but was missing a bunch of decorative parts that were grabbed as souvenirs by the film crew.

For eller om de skal Ever have it run again, it may be too far gone for a proper restoration, but they also bought the trailer, and memorializing the last time it was on screen for all time, may be an even better Hollywood ending.

WHAT DO YOU THINK OF THE LATEST MCQUEEN FIND? LET FOX NEWS AUTOS KNOW ON FACEBOOK.