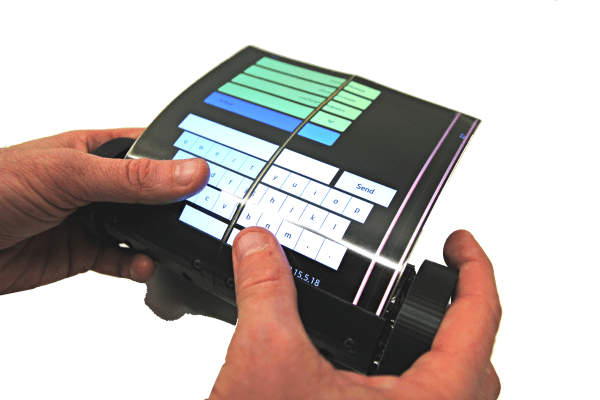 Research scientists at Queen's University Human Media Lab have built a prototype touchscreen device that is not smartphone or tablet, but kind of boats – and more. The device, which they dubbed MagicScroll, is inspired by old papyrus / paper / parchment rolls, so it takes a rolled cylindrical form factor – activated by a flexible 7.5-inch touchscreen in the house.

This new form factor, as they did using 3D printing, means that the device can be used as a previous rolodex (remember??) To scroll through the on-screen contacts quickly by turning a physically rotating wheel built into edge of device. (They have actually added one at each end.)

Then, when more information or a deeper is needed, the user can pop the screen out of the casing to expand the visible display. The prototype flexible screen has a resolution of 2K. So more mid-tier mobile phone by yore than sharp iPhone Retina display at this nascent stage.

The researchers also believe that the scroll shape factor provides a comfortable ergonomic option for making actual phone calls, provided a rolled roll can be sealed to the face.

Even though they still admit their prototype is rather big at this stage – albeit just adding to the glorious retro feeling of the thing, making it come across as a massive mobile phone in the 1980s. Like the classic Motorola 8000X Dynatac from 1984.

Although this is a big enough R & D stage, the team argues with the cylindrical, flexible display form factor of their prototype, giving advantages of being easier and easier to stick with hand than a traditional tablet, such as an iPad. And when they are rolled up they point out that it can also fit in the pocket. (That's a big one.)

They also imagine that it is used as a dictator or pointing device, as well as a voice phone. And the prototype contains a camera – which allows the device to be controlled by motion, similar to Nintendo's Wiimote gesture system.

In another fun twist, they have added robot actuators to the spinning wheels so that the roller can move physically or spin in place in different scenarios, for example when it receives notice. Clocky eats your heart out.

"We were inspired by the design of old rolls because their form allows for a more natural, uninterrupted experience of long visual timelines," said Roel Vertegaal, Professor of Human Computer Interaction and Director of Lab, in a statement.

"Another source of inspiration was the old rolodex filing systems used to store and browse contact cards. MagicScroll's scroll wheel allows infinite scrolling for fast browsing through long lists. Rolling up is a concrete experience that gives a full screen view of it selected item. Image scroll through Instagram timeline, messages or LinkedIn contacts this way! "

" Finally, we hope to design the device so that it can roll into something as little as a pen that you can carry in shirt pocket, "he added. "To a greater extent, the MagicScroll project also allows to investigate notions that" the displays should not be flat "and" everything can be a screen. "Whether it's a reusable cup made of an interactive display where you can choose your order before you come to a kiosk with a cafe or a screen on the clothes, we investigate how objects can become the apps. "

The team has created a video showing the prototype in use (built below) and presents the project at the MobileHCI Conference on Human-Computer Interaction in Barcelona next month. [19659002] Although any kind of mobile device similar to MagicScroll is clearly very far from yet another sniff of commercialization (especially as these types of terminals have long been bothered by mobile companies' R & D laboratories – while companies continue to pump out identical rectangles of touch-sensitive glass …), it's worth noting that Samsung has been slated to work a smartphone with a folding screen for a few years now. And according to the last talk about this rumor, it may be published next year. Or, well, it still can not.

But about Samsung's definition of "foldable" will translate into something as flexible bendy as the MagicScroll prototype is difficult, very questionable. A fused clamshell design – where two flat screens can be opened to expand them seamlessly and close again to shrink the device's wallet footprint – seems a much more likely choice for Samsung designers to do, given the obvious commercial challenges of selling a device with a transforming form factor that is also robust enough to withstand everyday use and abuse.

In addition to this, it is not clear that consumers would be inspired to adopt something so different. Sophisticated (and inevitable) fiddly devices are more likely to appeal to specific niche usage cases and user scenarios.

For the usual six inches of touch-sensitive (and flat) glass seems to do the art.