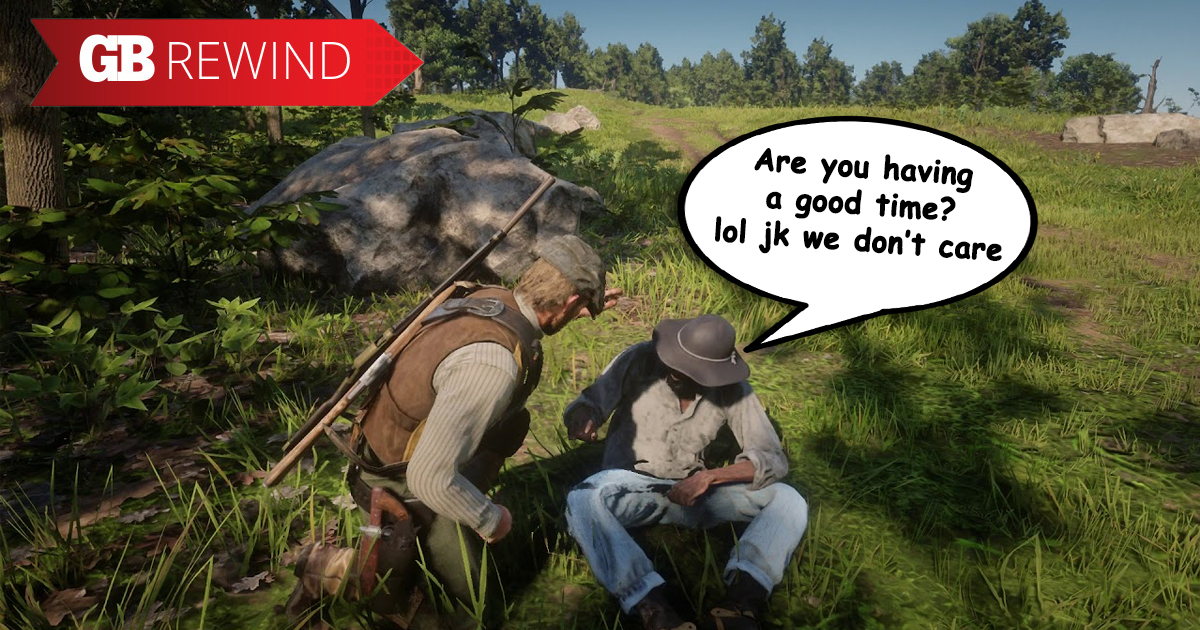 Despite everything, I think Red Dead Redemption II deserves credit for how fascinating it is. Rockstar Games has made something fun to talk about and write about. It is true even when I try to explain why I find it so disappointing.

To me, the Red Dead II antithesis of what I like about games. And it ignores my taste with a confidence and bravado that I find undeniable. When people talk about Red Dead Redemption II, it is common to hear that they use the term "singular vision". The implication is that Rockstar did the game in vacuum and bowed to how it was playing and feeling. It didn't look what Ubisoft or Nintendo did in the room. Rockstar knows best.

But I think it goes far beyond an outstanding vision, and instead leans hard to hubris. Therefore, Red Dead Redemption II wins the dreadful date as part of our PlayBeat Rewind 201

You can listen to us discussing the Red Dead Redemption II prize in the video clip or as part of our bad prizes in the podcast below:

Red Dead Redemption II doesn't just look away from modern open-world conventions. It also ignores the player. Rockstar is so impressed with their choices that it doesn't seem to ever stop asking how the game would make players feel. It was only interested in getting players to feel a certain way, and that is also the case if you do not join the tour. And it's a problem because the game repeatedly links you to how you feel as a player.

This problem most obviously manifests in the mission of the stories, where you turn off Rockstar's prescribed path, you fail. You get a game over.

These narrow paths are not the game that pushes back against the player in a fun or challenging way. It is Rockstar who pushes against the player. It's the developer who says, "You're wrong." Rockstar pushes you back on his path as if to say, "Look at all this we did. Can you see how smart we are?"

Rockstar scolds players to have their own curiosity and creativity. You're here to experience Rockstar's creativity, and that's it.

But where Rockstar's strong hand strengthens you in the corridors of the story's mission, it relentlessly throws a handful of predetermined experiences on you in the open world.

The studio packed the land with things to do, but Rockstar also wrote all these tours too. Hunting, fishing, poker, drinking, cooking and more are all available to you. But the developer throws these things on the player without giving any kind of writing to the player.

Red Dead II's activities are like theme park reproductions. Or put another way: You can go hunting, but you can't use hunting for your own ends. Red Dead has few real systems or systemic interactions.

Most people who have played enough Red Dead II ran into the poor soul on the side of the road crying to you for help with a snake bite. He's going to die without getting medicine or someone to suck the poison.

But the snake-bite man is just an animatron. He is a dance robot rat at Chuck E. Cheese. And Rockstar has strictly authored every way this interaction plays out. You can save or kill him. While saving him, you can claim money or just give him what he needs without taking anything back. And if you save him, the man will come up later in your world and pay for a product in a store for you.

This whole interaction is without systems that the player can use. For example, you cannot choose what you want from the man. I would have threatened him to join my bag in exchange for his life. Or I would have asked him to take me to his home so I could choose anything through his belongings for what I wanted for myself.

I'm not saying the game has to work that way. The point here is that Rockstar was so impressed with himself and how it used their systems that it never thought it wouldn't impress the players. It never makes decisions in your hand. Why would you want to interact with this world when Rockstar has built so many things for you to experience as it intended.

Red Dead Redemption II is suffocating. It has an illusion of freedom and choice. It has a moral system that goes up or down depending on the choices you make as a player. But if Rockstar wants to do something about the characters, it doesn't even take into account past actions.

If Rockstar needs Arthur to be enchanted by his current story movement, it doesn't matter that my Arthur shot every person on the side of the road asking him for help.

Red Dead Redemption II makes me think, "Why am I here?" It's like going on a date with someone who is completely self-absorbed.

It shoots down every idea you have and rejects your efforts to lead the conversation. It only has something to say when it speaks of itself. And because it's so beautiful, Rockstar can't grasp the fact that you're not so absorbed and impressed by what it is.

And if you agree with Rockstar, you can still feel good. You can dress up your cowboy, but you want to, and let Red Dead II show you a good time. But you just go together and nod in agreement with what the game has to say. If you expect anything more than that, this game will not care.