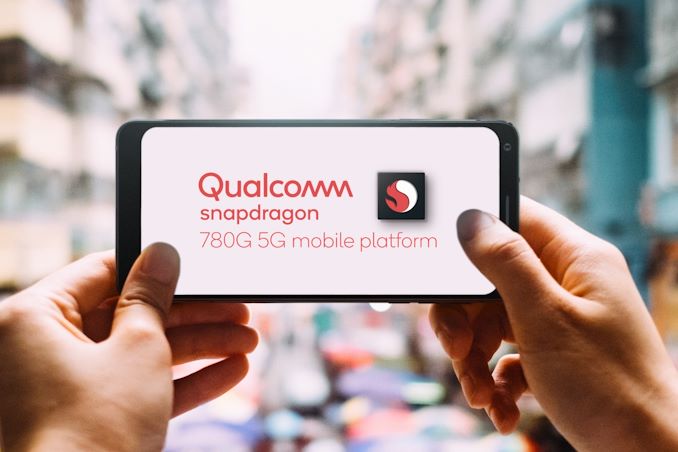 Today, Qualcomm announces the successor to last year’s fairly successful Snapdragon 765 series, a “premium” level that the company had debuted, with the same advanced features as the flagship Snapdragon 800 series, albeit at lower performance.

The new Snapdragon 780G follows its predecessor with some major upgrades in terms of performance and multimedia features, doubling the number of large cores – increasing GPU performance by significant amounts, and with the new, more powerful fused AI engine with the new Hexagon 770 DSP. Furthermore, camera recording capabilities have also seen major improvements with the new Spectra 570 triple-ISP.

At heart, the new Snapdragon 780G is a very different SoC to its predecessor, as it changes the CPU configuration quite significantly. We are moving from a 1 + 1 + 6 configuration, to a newer 1 + 3 + 4 setup, including a primary Cortex-A78 core at 2.4 GHz, three Cortex-A78 cores at 2.2 GHz and four Cortex-A55 cores at 1.9 GHz. Qualcomm promises CPU boost of up to 40% – the doubling of the large cores as well as the new microarchitecture used should really give a good boost in the daily user experience.

On the GPU side, we see the use of a new Adreno 642. As usual, Qualcomm does not reveal much details about the design here, but they do reveal a generation performance of up to + 50% over the Snapdragon 768G, which means over 765G that will grow to + 72 %. Based on our previous references, this should end up with similar performance as the Adreno 640 of the Snapdragon 855 flagship a few years ago – which means that the GPU is apparently appropriately named in terms of performance.

Qualcomm uses its latest fused scalar + tensor + vector DSP and AI engine in the new Snapdragon 780G, which means that it will be architecturally similar to the new device on the Snapdragon 888, albeit at lower performance levels. Qualcomm announces 12TOPs with AI performance across all SoC IP blocks, which are over 2x more than its predecessor.

In terms of DRAM, the SoC remains a 2x16b LPDDR4X-2133 design, which appears to be crucial for cost reduction in this market segment.

A very large upgrade of the capacities has been found from the ISPs to the camera. Again, like the DSP, the new design follows up with the same new IP architecture as the Snapdragon 888, using a new triple Spectra 570 block capable of operating three RGB camera sensors simultaneously. 192MP shooting is possible for single modules (with shutter delay), or in the case of zero shutter delay operation, we can see either 1x 84MP, 64 + 20MP or 3x 25MP sensor configurations. When it comes to video coding, we do not see much change compared to its predecessor, so we assume that the video recording options remain the same.

What is very interesting about the new design and probably tells about the wider market in general, is the fact that the new part no longer advertises mmWave functionality on the part of the modem. The new X53 modem has apparently chopped off this feature from the specification sheet. In general, mmWave remains an extreme niche feature that is currently only widely distributed in selected US cities globally. Given that SoCs target devices at lower price points, and we’ve seen some extremely cheap Snapdragon 765 phones in the last year, the mmWave features were probably in conflict with the market segment these phones were aimed at – vendors always have the option to use higher- end solutions like Snapdragon 870 if they want to include mmWave connection.

Finally, the new SoC will be produced on Samsung’s 5LPE process node, which is an upgrade over the 7LPP node in last year’s Snapdragon 765. Although the node does not appear to be as promising compared to TSMC’s 5nm node, it will be employed in an SoC in This price category is definitely a positive and should show remarkable gains against its predecessor.

Qualcomm plans to pack the Snapdragon 780G SoC with FastConnect 6900 Wi-Fi chips that have Wi-Fi 6E connectivity, hopefully signaling a wider range of uses of the new 6 GHz spectrum technology.

The Snapdragon 780G is expected to be distributed in commercial units in the second quarter of 2021.