I think it's worth noting before I start talking about Persona 3: Dancing in Moonlight and Persona 5: Dancing in Starlight that I'm rather into two rhythm games. I play them a lot. DJMAX, Project Diva, Taiko no Tatsujin, Musynx, Theatrhythm – while I hesitate to call myself an expert in the genre, I definitely have more experience with it than most. So, some of my qualms with Persona Dancing might sound odd to anyone who's just looking for a Persona spin-off first, and a rhythm game second. Persona 3 and 5 Dancing are good games, but they are probably not a good value (unless you have not already played Persona 4 Dancing on the Vita, and you're grabbing the Eternal Night collection). I do not usually like considering value when writing reviews, but when you're asking $ 60 for Persona 3 and 5 Dancing every outside of the all-in-one pack, the distinct lack of value included in that price is hard to ignore.

As far as gameplay and presentation goes, Persona 3 and 5 Dancing feel incredibly similar to how Persona 4 Dancing played on the Vita. 3 buttons on the right correspond to the 3 note overlays on the right of the screen. The 3 sections on the left of the dpad correspond to the 3 note overlays on the left side of the screen. The PS4's touchpad, analog sticks, or optional the L1

/ R1 buttons correspond to scratch notes that overlay the playing field's border. It reminds me considerably of Samba de Amigo, albeit without motion controls. It's entertaining, and the controls themselves are fluid and responsive without any issues. I highly recommend enabling R1 / L1 for Scratch notes in the options, but other than that – no complaints here! 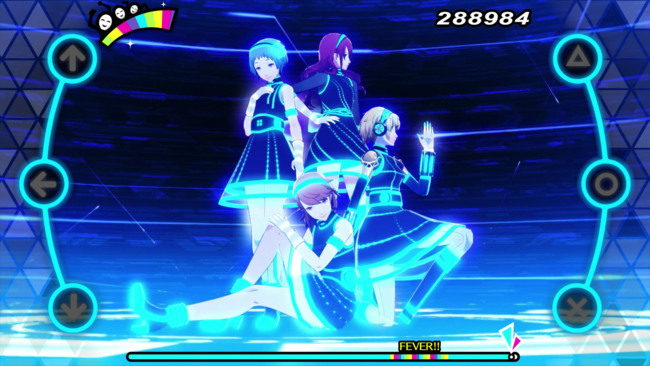 Players once again have the Fever meter to contend with, which activates depending on how many rainbow scratch notes you land before certain sections of each song. Clear the threshold, og du vil låse sektioner af sangen, hvor flere deltagere vil danse på samme tid, som giver et løft i din multiplayer score under dansens varighet. Similarly, the Audience Gauge returns – which is your only determination on whether or not you clear a song. Every rhythm game tends to have a different clear criteria – Project Diva is my favorite, with its rating system based off of a percentage of notes landed, with Theatrhythm sitting a close second. DJMAX and Musynx both have a meter that you have to keep filled to not fail a note chart, but as long as the meter is not completely empty you will pass a song. Persona Dancing uses something closer to Taiko's system, where you have a meter, and you do not fail when it empties – but in order to pass a song, you must keep it filled a certain amount at the time the song finishes. 19659002] Personally, I do not care much for this system. I'd rather the first two any day of the week, men jeg kan forstå hvorfor andre kan foretrække det. I just do not like perfecting a song, messing up the last 10 or so notes, which sometimes is enough to drop me out of that threshold for passing the chart. The scaling seems to be better than Persona 4 Dancing's by a considerable amount, thankfully, but again … I've certainly seen worse clear systems in some rhythm games. 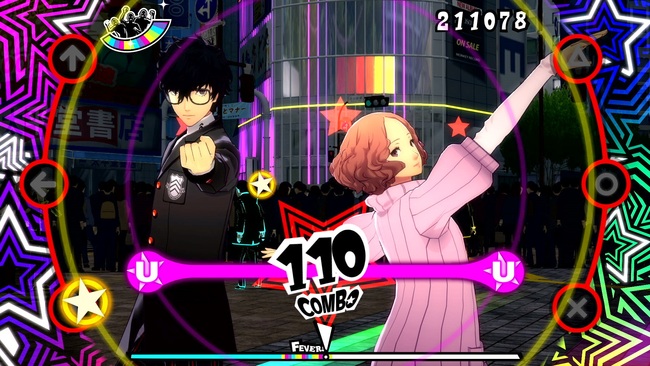 My larger, more general complaint with the game has to come with the note charts themselves. Project Diva and Theatrhythm tend to base their charts off of the "feel" of a song – primarily the vocals – and not the actual musical notes within. DJMAX, Musynx, and Taiko, on the other hand, tend to base their charts much more closely on the actual musical composition of a song. Persona, on the other hand, does not seem to fit into either of those camps. Mens de fleste af notatdiagrammerne er helt fine, uanset om det er det, det aldrig rigtig føles som notatkartene lined up med enten sammensætningen eller "rytmen" af sangen helt som de skulle. Maybe a personal nitpick, but one I can not really ignore.

Character models are all high quality, about what you would expect. Animations, while goofy, are perfectly fine in and of themselves. However, that's about all the good I have to say about the game's presentation.

Person 4: Dancing All Night had a story that players progressed through. It was not a great one, I would actually argue it was downright bad, but there was something there that contextualized the dancing, giving the game a reason to exist as a Persona spinoff. På trods av min kvalms med P4Ds historie, Persona 3 og 5 Dancing, men ikke så egentlig forsøger at kontekstualisere deres "plot", gør det lidt svært at bekymre sig om nogen af ​​de tegninteraktioner, at spillet synes at have medtaget som en erstatning for an actual story. You might think this is a weird complaint for a rhythm game – I agree. Men, Persona 3 and 5 Dancing offer a horrible value if you're purely looking for a rhythm game on PS4 and Vita. On PS4, you can get Project Diva Future Tone for less than $ 60 and get 200+ songs to play with … or you can pay $ 50 and get something close to 150 songs in DJMAX Respect. 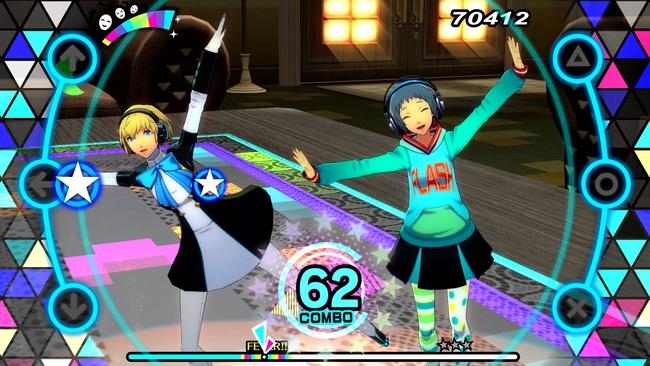 On the flipside, Persona 3 and 5 Dancing have 25 songs each. For $ 60 each on PS4 – though at $ 40 on Vita, they are not exactly an amazing deal there either. IA / VT Colorful exists. Taiko no Tatsujin V exists. Project Diva f / F 2nd / X exist. The Eternal Night Collection makes things less of a downright rip-off on PS4, but then you're still paying $ 100 to get just under the amount of content you can get from other, better rhythm games for half the price. It's up to the Persona side of things to pick up the slack and give the games better value, but since character interactions have no context and never go beyond the characterizations seen in their base games, it's hard to take that part of the game's content seriously too. As you go through Social Link challenges, you can finally explore character's rooms, and it has PSVR support which is neat, but somehow these character interactions offer even less for Persona fans than Persona 4 Dancing's already disappointing story.

Disclaimer: A copy of this game was provided to the RPG Site by the publisher.