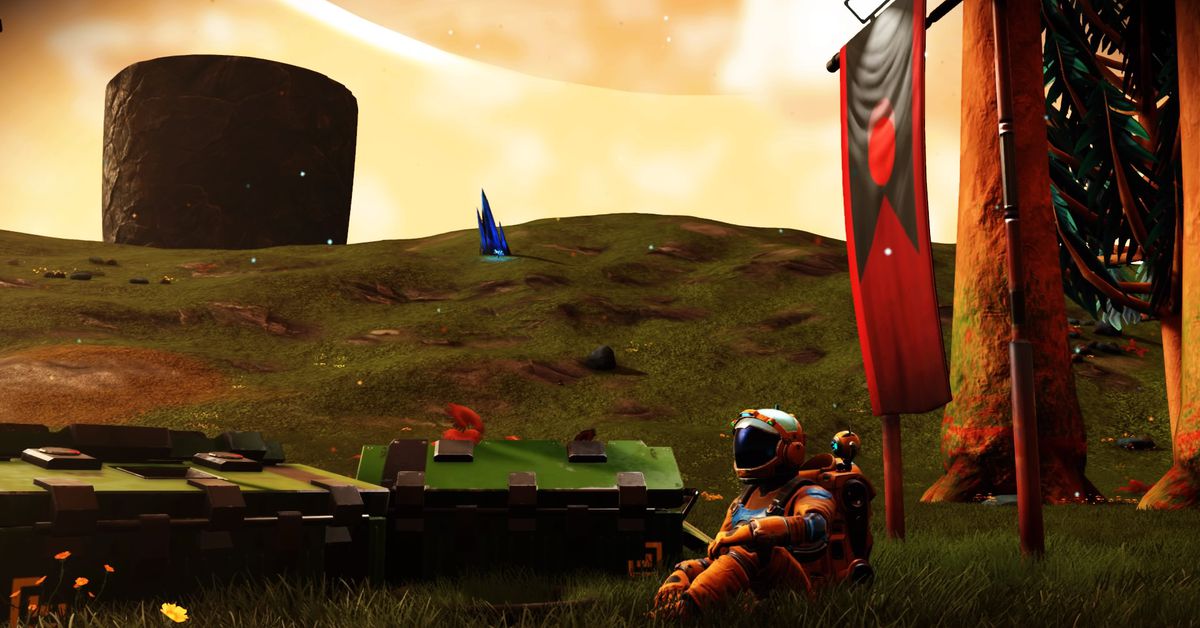 Two years ago, when No Man's Sky was first launched, I wrote a diary that crowned my adventures in the game's scattered, processorally generated universe. Since 1965 the game has changed significantly last with this week's No Man's Sky Next extension which is the biggest update yet. It adds new styles of planets, right multiplayer, and a third perspective among other things. So it seemed like a good chance to dive back and start the diary again. You can capture my past experiences – and follow my new – here .

I can see myself. It feels like the first time.

It has been a long time since my last adventure. Many years ago, I spent countless hours on the universe. At first it was pointless. I could not get enough of the excitement of being the first person to set foot on a strange foreign world and catalog its inhabitants. It was dangerous and exciting, and when the excitement wiped off, I chose another route. Guided by a mysterious cryptic voice, I followed something called the Atlas Road, a galaxy-jumping quest as promised ̵

1; but never delivered – true answers to the nature of the universe. Disillusioned with Atlas, I ended up on my journey.

But the universe continued to call, so here I am, in a brightly lit space station that amazes my own exosuit, which is a soothing orange trimmed with a clean baby blue. I've never looked at it carefully before. It is remarkably creepy considering the dozens of poisonous rain rays and laser fights it has been through.

My spaceship, a strong craftsmanship that seats one and has a lot of battles, is exactly where I left it, even though the pyramid-shaped space station is much more lively than it used to be. It's filled with Korvax – a race of robotery that has no expression-free face shots – and they all seem to have a job for me to do: snap some pics of new alien creatures or destroy any pesky pirate ships. I start with a number of simple jobs and find out that I will probably be able to complete them on my trip. Then I head down the winding stairs and jump in my ship.

The cockpit is just as I remember it. The cage that surrounds me, the design of lumpy buttons, the screens that tell me everything I need. It's like I never left. When I turn on the engine, I hear the famous thrum when the ship goes into the room without any problems. This star system is a sensational pink, and the first thing I see is an ink black, rippled planet that is brilliant against the bright backdrop.

I just want to sit and enjoy the view for a little – but the universe has other plans.

Not far from the station rages a blow. A trio of massive ships is the battlefield, while smaller fighters dance around them, shining full lights on each other. I can not even tell who's fighting who, but a moment after I leave the drive, lasers start shooting in my direction. Perhaps they think I'm a pirate who seems to breed the freight to precious resources. Whatever the cause of the attack, I do not want a part of it; I have never been much to fight and being drawn into a fight that has nothing to do with me does not seem very appealing. I have to burn some warning shots to clear spaces, as I add to what appears to be a lush planet that is just a fast jump from the station.

After coming from the game, largely rude, I find myself among a cluster of gold and silver asteroids floating around the planet. So my communicator chimes, a surprise since it lies most quietly quiet. A Korvax trader seems to have been taken up in the match and looking for help. But I have not flown my ship this year, and I do not feel prepared for rescue missions. It's more than a small fault that I turn off the communicator without answering.

When I get down on the planet, that's exactly what I had hoped for. I see live forests and fly dinosaur-like birds. There are dark caves and fields of glowing rocks. I need to get myself back with supplies, given the long layoff, and this seems like the perfect place. Except when I approach the surface looking for a nice place to land, I realize that a quartet of pirates has followed me and they immediately open fire.

Getting in a dog team is like riding a bike. It's all muscular memory. With no other choice, I put on the ship to meet the intrusive and get rid of a volley of fire, which switches between explosive rockets and laser blaster. I manage to take down three of them while I almost do not take any damage, and the last ship quickly tells the planet to escape. It turns out that I was prepared for rescue missions, and now I feel even more guilty of leaving the trader stranded.

I'm pushing it behind me, for now I'm finally alone – for now, at least – I can work on my true purpose on this planet. One thing that gnawed on me on my original journey was that I always moved, never settled in one place for long, never had a place that really was mine. I am determined to change it. I have decided to build a base on this planet, a home that I can come back to when I need a sense of comfort in this big and often unpleasant universe. I realized a nice, quiet planet with a warm atmosphere would be a great place to lay down roots. And after doing some mapping, I find a nice place near a rock to start building.

I had done a little construction in the past, but it feels different this time. Recipes for creating new objects have changed and require a variety of new techniques. I need to build a portable refinery to make resources suitable for construction. It's a long process, one made even more of Sentinels, the flying robot guards who live on almost all planets in the known universe. Usually Sentinels will leave me alone unless I really destroy, but here they are much more temperamental. They start attacking me just for mining. They are also much smarter than Sentinels I have met before. In the past, I could trick them by hiding in my ship. This time they are floating around my craft waiting for me to come out. I am forced to leave the planet completely for a little.

I use this as an excuse to visit the striking ringed planet. According to my scanner, the world is mostly devoid of life, which should make it a great place to quickly gather minerals and other resources needed to build my first home. I land and go to work immediately using my bright red mining beam to cut the stones into useful bits that I can take back to the base and refine. The planet is dead; apart from some shrubs, there is no sign of life, and the desolate landscape is smooth without Sentinels. It takes some time, but I fill my ship with as much rock as it can carry and then head back to work on my base.

After an hour I have a single shelter: a round room with a basic construction computer inside. It's not much, but it's a start. And I finished it just in time. It turns out that this beautiful world has more problems than just annoying Sentinels. My computer warns me of an incoming rainstorm. Normally, this is nothing to worry about, of course, and this planet is not toxic, so I do not have to worry about sour rains or other nasty chemicals. But for whatever reason, when it's raining here, it's getting so hot that it's not safe. And then I'm looking into the refuge of my newly built house.

When I wait for the storm, I have plenty of time to think. My previous trip had been marked by loneliness, traveling alone and unrelated. But from the moment I started again, it seems like I can not have a moment for myself. Korvax with jobs to give, the pirates are looking for a battle, Sentinel-protected nature. But when I'm sitting here in this largely empty building, it's raining the fall on the metal roof, I can not help but miss being part of a society. You can only be alone for as long as you begin to demand interaction, whether it's human or foreign. I'm determined to make this adventure better than the last and this could be the answer.

Perhaps what this trip really needs, someone is sharing it with.