Nintendo and Tag Heuer made a $ 2,000 Mario-themed smartwatch 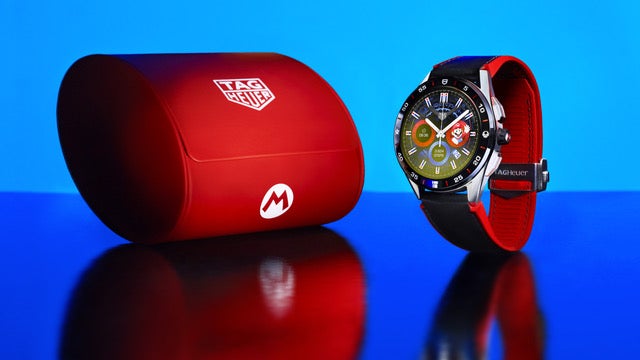 Following a teaser release late last week, Tag Heuer, the maker of Swiss luxury watches, has announced that it has teamed up with Nintendo to create a Mario-themed smartwatch. And it costs $ 2150.

According to the press release, Tag Heuer’s new premium watch is themed around Nintendo’s iconic mascot, and has a 45 mm dial, a built-in heart rate monitor, compass, accelerometer, water distance up to 5ATM and two straps: a red rubber strap and a black red rubber strap. The watch includes a 430mAh battery, which Tag Heuer claims will deliver a full day of battery life on a single charge.

As you’d expect, this limited edition also includes a Super Mario-themed interface with four new dials to choose from, such as one where Mario becomes invisible or another where Mario is on top of a warp tube. Tag Heuer confirmed that it will use a “gamification rewards system”, with Mario greeting you every morning when you wake up, and various animations being played each time you complete a step towards a daily step count.

The Mario-themed smartwatch will be available from July 15 and costs $ 2150. However, only 2,000 units were created, and depending on the region, you can only purchase them in select Tag Heuer stores or on the Tag Heuer official website.