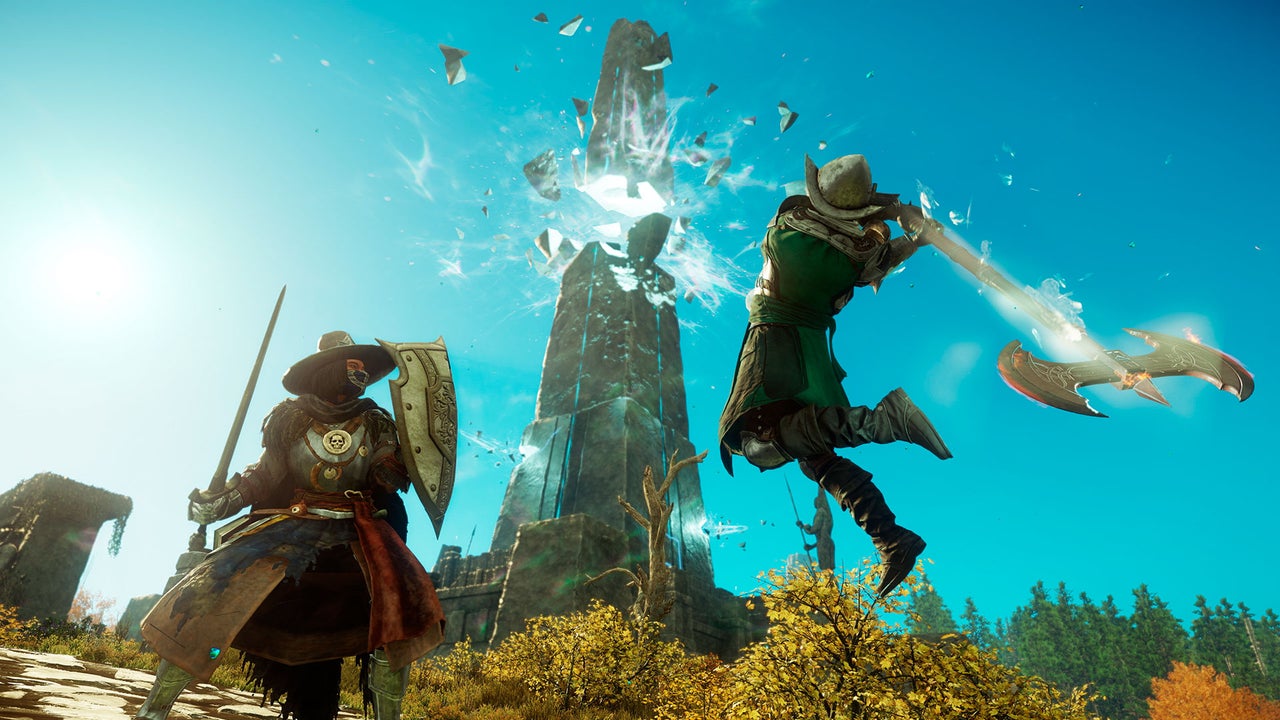 If you are not already familiar with it, New World is the upcoming and long awaited MMORPG from Amazon Games Studios. And that wait is almost over, given that New World will finally be launched to the public next month on August 31st. As a quick overview, this is an action-focused MMO that has everything from factional warfare to a rich open world that is packed with missions, treasures and discoverable places and settlements, and after spending some time on it now, I am confident in saying that it comes together nicely. This past week, I got a full five hours to run around, leveling my own character from scratch – a process that made me venture through the very first zone, Windsward, spanning the first ten game levels and then some ̵

1; and then jumps into a session in New World’s PvPvE mode, Outpost Rush. And finally, I was given a tour through one of the New World endgame dungeons – The Lazarus Instrumentality – which is aimed at parties with five characters who have reached level 60.

The first part of the preview event made me start from scratch. And this was no mistake: the beginning of a new character in the New World gave me free time to slow down and experience the island of Aeternum through the eyes of a healthy survivor after a shipwreck. And let me tell you – it was a huge success. As you get out of the beach and closer to the Windsward settlement, you will be treated to magnificent views and beautiful, flora-rich valleys where you can close down the campsite and just watch the time pass by the fire if that’s what you want. But there is stuff here too – the world itself is filled with hidden nooks and crannies where you can find useful items, bosses or treasures. There are a number of missions to do – they do not seem incredibly deep beyond what you expect from some old MMORPGs, but they do point you to interesting places. It definitely channels other popular open world games like Skyrim or Genshin Impact, but in an alternative and far more Grimdark vision from the 17th century, if that suits you.

There are many discoverable places that appear on your compass as you approach them – I stumbled upon many caves and deserted farmlands by chance, and of course it is the rustic but thoroughly built Windsward settlement that seamlessly fits into the open world. But the world itself is also quite malleable and unpredictable. First, the landscape is dotted with resource nodes – such as trees, shrubs and boulders – that blend right into the background, and you can actually harvest some of the resources you see. You can temporarily change the topography of the world around you, for example by converting a forest to an open clearing. This is not the first time I have seen this concept work in an MMO, but New World definitely goes beyond making you feel like you are directly tapping into – and changing – its realistic and detailed world.

But as I said earlier, it’s unpredictable. In fact, Windsward and the surrounding areas are much more dangerous than I expected for a zone targeted at low-level players. When you wander around and find your warehouses at a low level, you will also encounter enemies that are far higher than you, as Corruption is slowly taking over the region. This can lead to some really scary encounters, where the sky turns red and foggy, and enemies with question marks on your names will correct a great distance.

At one point, a group of monsters chased me all the way up to the gates of the Windsward settlement. At another time, I saw another player drive past me with a train of enemies on his tail, and I actually managed to fend them off in what ended up being a tie moment. In this sense, New World recaptures the kind of danger and inter-dependence of other players that were present in older MMOs.

And then I was ferried to Outpost Rush, New Worlds 20 vs. 20-player PvPvE battlefield. I thought it was fun when I tried it a few weeks ago and focused on attacking and defending bases with a bow and an ice glove, but this time I built completely differently and went with a fire brigade and a large ax – both are useful for quantity control in close combat – and instead of going head-to-head with opposing teams all the time, I spent more time exploring Nauthynos Island. In fact, I finally made my way down to the Corrupted Portal, where I easily struggled with dryads while collecting Azoth and adding wood to haul back to my fortress. It was a markedly different experience that showed me that even if you are not big in PVP, there will still be many ways to go off and focus on PVE things while still contributing to the team’s success.

The last part of the preview took me to Lazarus Instrumentality, a dungeon for the playoffs with some really tough bosses who took strategizing from the whole group to get through after several attempts. As an avid Elder Scrolls Online player, this guy reminded me of some of ESO’s newer dungeons like Scalecaller Peak, where it’s very easy to wipe unless each party member does the right thing at the right time – but eventually comes through the annoying boss or the really challenging puzzle for the first time feels like a well-deserved victory. And my party shared several of those moments together.

I initially tried to be the party’s specified tank with only a hatch and a spear, both of which are nice DPS weapons, but completely pale compared to the classic sword and shield when trying to be the party’s only tank. But through New World’s practical respec system, I was able to quickly exchange not only my most important weapon skills, but also my entire attribute sheet in the dungeon. And instead of optimizing for the hatchet and the spear (both of which depend on dexterity), I focused my attributes on the constitution – like a proper tank.

Like last time, I had a weak connection to Amazon Games’ test server – located on the east coast, and often an average of 200 to 300 milliseconds ping. If you do not know what it means, it basically translates to one or two bar signals at a time, which is unacceptably low for most online games. And despite that, I still managed to have a steady enough connection to play for five hours without too many problems. Besides a few crashes and a bit of a sticky fight when the delay increased, New World still managed to be coherent in general.

At the end of the preview session, I became particularly interested in many of the deeper interlocking systems that stimulate higher and lower level players working together.

For example, the aforementioned corruption system comes to mind here. Each player can collect materials and make items to contribute to a settlement, making it level and offering more services and facilities, but it sounds like corruption will gradually evolve through a zone, resulting in invasions there, if the corrupting forces succeed, which will actually make the settlement level down again. This sounds like a strong combination that could lead to an interesting tug-of-war for the dominance of the open world between you, your faction and Corruption.

It does not sound like you will ever be put together in a playing style if you prefer PVP over PVE or vice versa. “

If you are interested in ARPGs or action-focused games in the open world, and you are also a fan of MMORPGs with a faster feel to them, New World will probably be your cup of tea. It has a bit of everything, but it does not sound like you will ever be hampered in a style of play if you prefer PVP over PVE or vice versa.

Whether or not these systems actually come with the same amount of nuance ultimately depends on how popular New World ends up being launched next month. But right now, especially after what I’ve shown, my fingers are crossed.