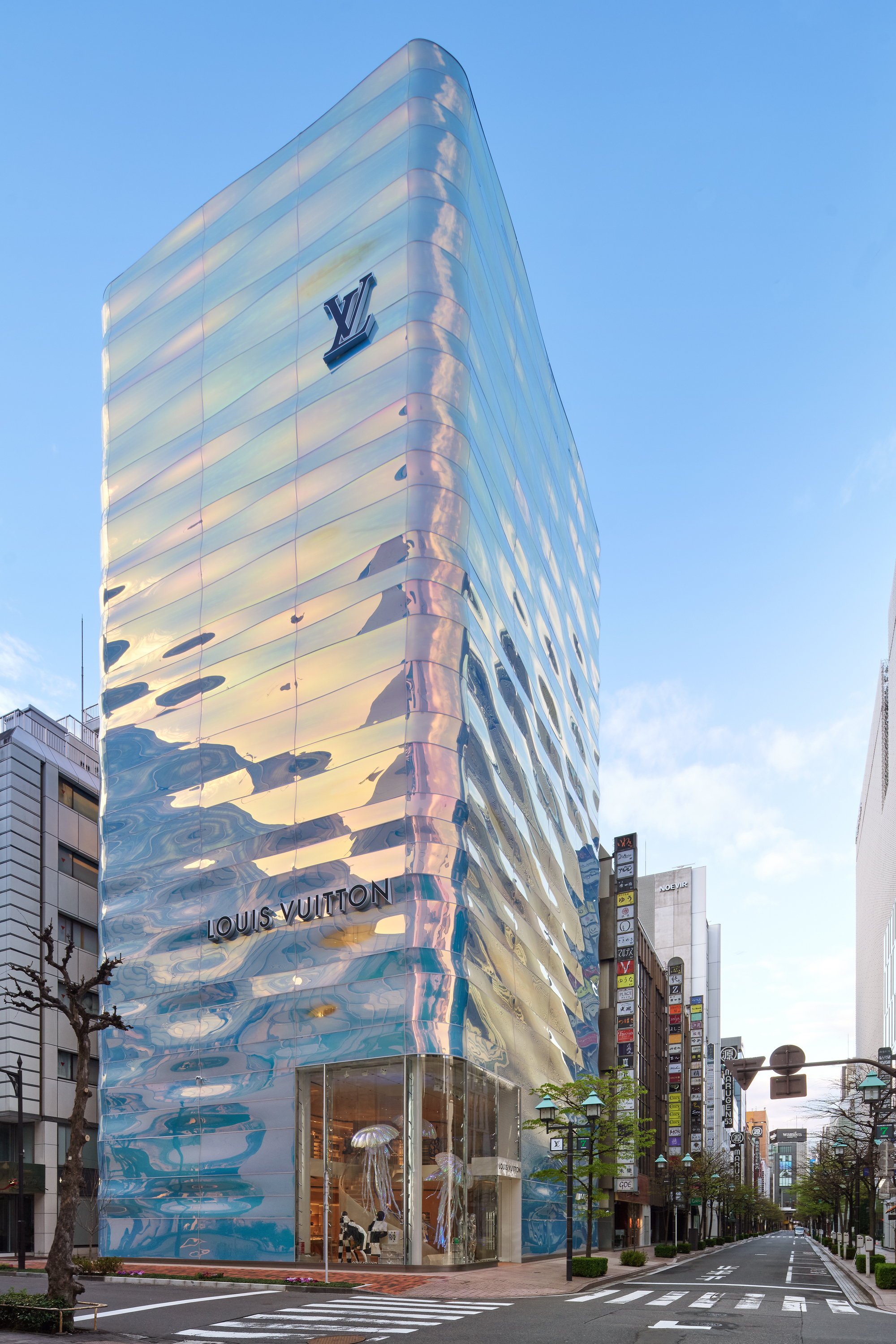 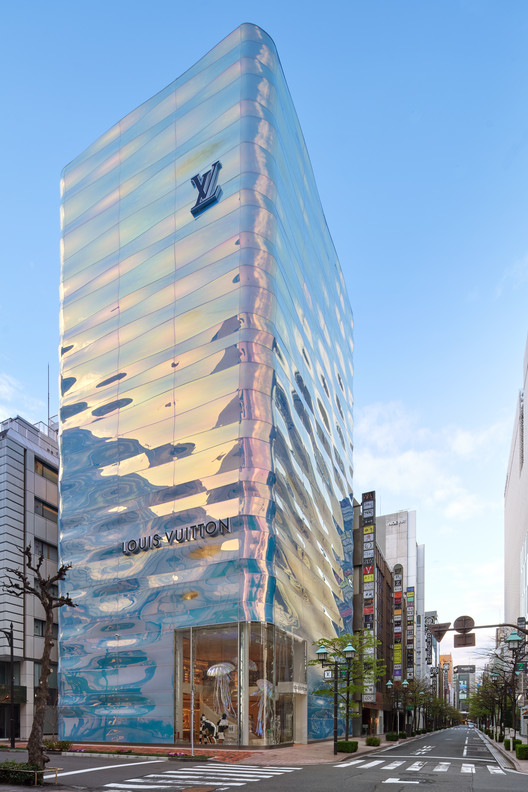 Text description given by the architects. With great anticipation Louis Vuitton announces the arrival of Louis Vuitton Ginza Namiki in Tokyo’s Ginza district. The store presents an ambitious transformation of an existing place. Reimagined as an aesthetic dialogue between virtuoso architects, Jun Aoki and Peter Marino, a brand new, naturalistic tower rises, inspiring wonder – both outside and inside.

From the same corner layout, occupied by Louis Vuitton since 1981, the building’s very modern appearance interprets reflections of water as a material phenomenon. Poetic, yet playful; sparkling and rhythmic. Once a peninsula that stretches in Tokyo Bay, this development of water is expressed everywhere as smooth, undulating surfaces – from the glass facade that transmits changing colors to functional stairs and fixtures. The store offers four floors, and is complemented by a permanent pop-in room for seasonal animations of newcomers and an upper level dedicated to private lounges. The shopping experience culminates in Le Café V, where the famous chef Yosuke Suga collaborates with the house for the second time, in addition to developing flavors for Le Chocolat V, the very first line of Louis Vuitton chocolate that will have its world debut here at the end of April .

Reflective Ginza – Consisting of two layers of glass, the facade of Jun Aoki is at once monolithic and imbued with liquid – his representation of a “pillar of water”. Virtually seamless, the outer squares curves and ripples; their three-dimensional surface enhanced by dichroic glass that provides endless color variations. At street level, the building reflects the dynamics of Ginza; higher up, neighboring towers become wavy looking, while a heavenly landscape sweeps over the glass and marks every day.

In the evening, the bright reflections that dance around the base fade upwards, giving the illusion of insignificance. Meanwhile, a transparent double-height opening around the street corner curves into the store as a main perspective with space to stage the Louis Vuitton signature window.

Always up to date – Once inside, Peter Marino’s design emphasizes the building’s organic aesthetics with a central staircase that unfolds like a band of sculpted oak surrounded by glass. A second staircase, located towards the back of the shop, is framed by a four-storey function wall that interprets Kimiko Fujimura’s painting, Wave Blue Line (1977) in artistic applications of plaster. If the water metaphor continues, the circulation will be both architectural and spatial. As customers move through the store, they will notice curved benches and ceiling panels that contribute to the feeling of flow. Rounded furniture in light shades of wood and glass by Morten Stenbaek or Isamu Noguchi adds to this effect. Even the elevator conjures up the feeling of water and sky, with the curly metal surface multiplied by mirrors that play out like an endless horizon.

Navigate the store – Of the seven floors, four are dedicated to retail. The main level consists of leather goods, watches and jewelry for women, and the permanent pop-in room, with extra leather goods for women, as well as accessories, travel and fragrance on the second floor. Women’s universe – including clothing and shoes – extends across the third floor; while directly across the fourth floor is the complete men’s universe. VIC and VIP lounges are located on the sixth floor; and at the top level are Le Café V and Le Chocolat V, the debut of Louis Vuitton as chocolate.

An extended offer – In addition to presenting a complete range of the latest products, the store will be a destination for exclusive pieces, starting with a limited edition of Rei Kawakubo’s Celebrating Monogram collaboration bag from 2014 in leather. The legendary designer’s first connection to Louis Vuitton dates back to 2008 when she created six custom monogrammed handbags, after admiring the house’s approach to craftsmanship and savoir-faire ever since the opening of its first location in Japan in 1978. Among the first selection of exclusive pieces will be men’s LV Ollie sneakers adorned with embroidery and pearls; a fully embroidered dress with monogram sequins; and a sleek Tambour watch exquisitely exquisite with blue and purple sequins. Handbags found only at Ginza Namiki include Capucine’s BB in a timeless chord of gray canvas and navy blue leather, and the Boîte Pharmacie handheld Monogram suitcase designed in collaboration with kabuki actor, Ebizo Ichikawa XI.

Chromatic energy – From Pierre Paulin and Stefan Leo furniture in sour tones to works from Ed Moses, Vik Muniz and Zhang He, color adds liveliness to the store. Arrangements of seating, design objects, rugs and art change through different expressive tonalities: an impressionistic layout of pink, orange on the women’s floor, saturated shades of red, turquoise and lime on the men’s floor; and a mix of muted and pop accents throughout the private lounges designed with a modular layout for larger or more intimate settings. With extra abstract art from the likes of Kimiko Fujimura, Ida Tursic & Wilfried Mille and Peter Dayton, color works as an uplifting and inspiring theme that takes many forms.