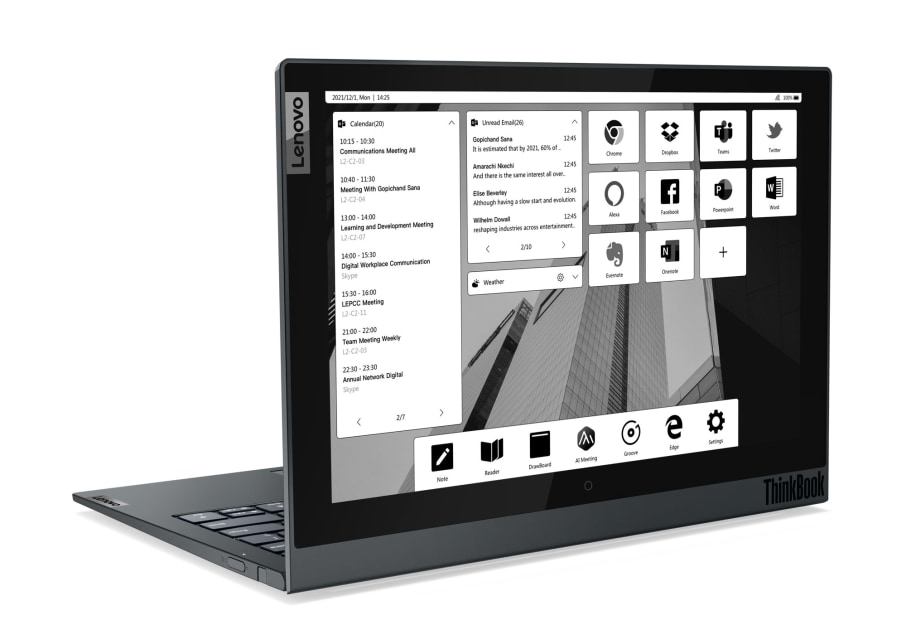 And then there’s the stylus: you’ll be able to doodle or take notes on this second screen just like last time, but there are some notable changes to keep in mind. First, the pen fits into the laptop this time, rather than the magnetic – and slightly difficult – click on the side of the screen. More importantly, the pen can also be configured to launch specific apps once removed from the house, a feature that makes it not feel different from one of Samsung’s brand S Pens.

Meanwhile, the rest of the machine is pretty standard road warriors. You can unpack it with up to an 1

1th generation Intel Core i7 chipset and up to 1 TB of storage, while 16 GB of RAM, integrated UHD graphics, WiFi 6, 2 W stereo Harman Kardon speakers and two Thunderbolt 4 compatible USB C-ports are common in all configurations. Lenovo says you can expect up to 15 hours of use from ThinkBook Plus’ 53Whr battery, though you can squeeze significantly more life out of this laptop if you only use the E Ink screen – think 24 hours or so.

The original ThinkBook Plus was charming in its strangeness, but some of Lenovo’s software and feature choices did not feel in line with the laptop’s focus on business. This time, however, the company not only understood the functionality of the second screen – it focused it. Sure, that means it’s a little less fun than before, but hey: these changes also make Gen 2 an easier sale for IT departments, and a great conversation starter for professionals who end up with these things.