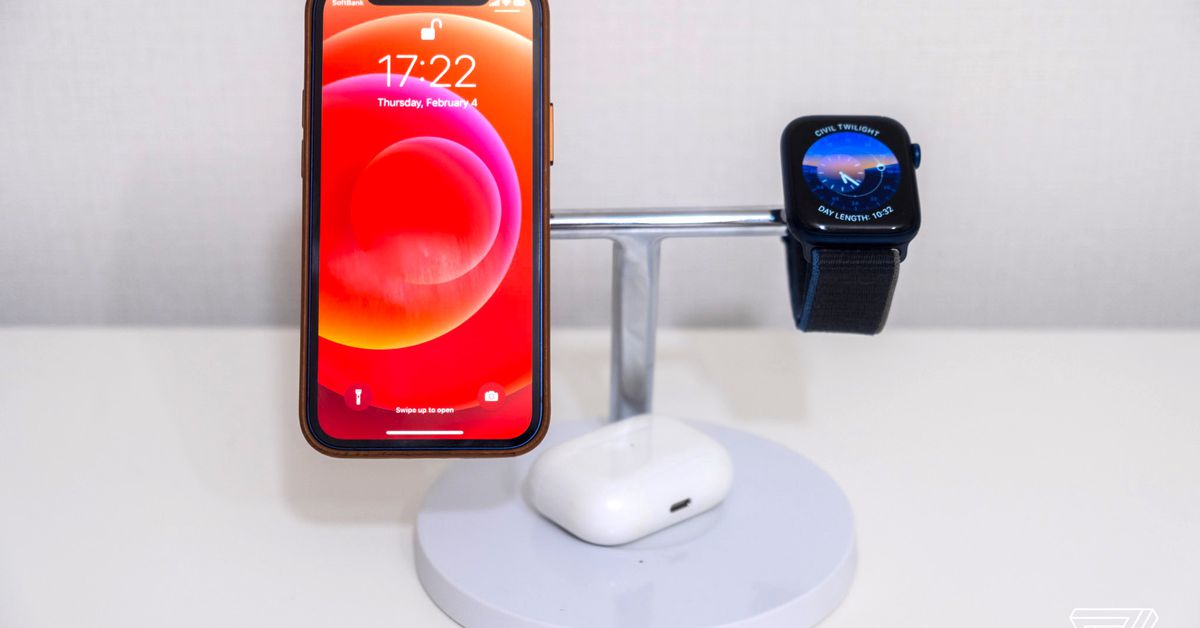 A $ 139.95 wireless charger that looks like a cross between a bonsai tree and the 2001 decor: A Space Odyssey may seem like a niche product. But if you have an iPhone 12 and an Apple Watch, Belkins ridiculously called the Boost ↑ Charge Pro 3-in-1 wireless charger with MagSafe is actually great.

Charging Apple devices has become more complicated recently, at least for me. Now that the Apple Watch tracks sleep, I’ve been charging it with a messy cable at my desk for an hour or so when I start the day, instead of overnight. And while I prefer to use vertical wireless chargers so I can read alerts when they come in, the iPhone 1

2 mini turns out to be too small for most racks – the charging coil is not high enough on the back of the phone.

Belkin’s new charger not only solves both of these problems, it makes wireless charging a better experience than ever before. The wood-like design has two stainless steel “branches” – one on the left with a 15W MagSafe puck for iPhone, and one on the right with an Apple Watch charger. There is also a 5W Qi charger built into the base, which should work with almost all Qi devices.

This is the first official third-party MagSafe charger, and I think it’s much more useful than some of Apple’s own alternatives. It supports the phone to the perfect height for quick glances when you’re at your desk, and the charger is sturdy enough to hold and release the phone with one hand without the base moving around. The phone feels very secure either alone or in Apple’s MagSafe-compatible leather case.

The Apple Watch charger works just as well, and I’m glad something like that ended up on my desktop instead of Apple’s unfortunate AirPower universal charger. The device was supposed to charge the watch as well as the iPhone, but it probably would not have worked with the straps that I have as a loop, which I usually use when they get in the way of the watch’s charging element. This solution works with all watch bands, and it is much more convenient than fiddling with a cable.

The Qi charger at the base does what you expect. It is ideal for low-power Qi devices such as AirPods that only charge up to 5 W, but it is good for Android phones as long as you do not need fast charging. The base is large enough to fit larger phones without the steel stand getting in the way.

My biggest complaint with this charger is that the power supply uses a barrel outlet instead of USB-C, but it’s not that important for something that will never leave my desktop. It’s still not for everyone, of course. You reasonably think the design is too weird or the price too steep. I personally like what it looks like, and while it’s certainly not cheap, I think it’s better value than some of Apple’s MagSafe chargers so far.

Belkin also makes a similar MagSafe dock without an Apple Watch charger for $ 100, which is probably a better option for most people. However, if you have found yourself with my specific charging dilemmas too late, I can recommend the 3-in-1 version quite highly.