How teenagers and parents navigate on screen and device interruptions 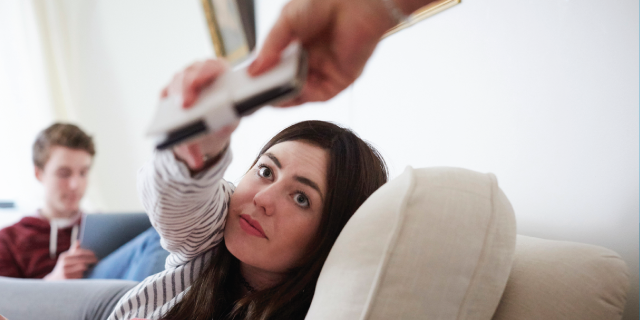 54% of American teens say they spend too much time on their cell phones, and two thirds of parents express concern about their youth screening time. But the parents are facing their own challenges of unity-related distraction

Because of Roiling debates about the effect of screening time on teenagers, about half of these ages 13 to 17 are worried that they spend too much time on their cell phones. Some 52% of the US teenager report takes steps to cut the mobile phone, and similar stocks have attempted to restrict the use of social media (57%) or video games (58%), a new Pew Research Center survey finds.

Teens & # 39; sometimes hyperlinked relationships with their devices are also evident in other findings from the center. Around 72% of teens say they often or often look for messages or messages as soon as they wake up, while about four out of ten say they feel fearful when they do not have their cell phone with them. Overall, 56% of teens associate the absence of their mobile phones with at least one of these three feelings: loneliness, upset or feeling anxious. In addition, girls are more likely than boys who feel anxious or lonely without their cell phone.

Parents are also anxious for the effect of screening time on their children, showing their own investigation. About two thirds of parents say they are worried that the youth spend too much time in front of the screens, and 57% report setting the time limits on their youth screen in one way or another.

At the same time, some teenagers have admitted that they also struggle with allure of monitors: 36% say they spend too much time on their mobile phone. And 51% of teens say they often or sometimes find parents or carers being distracted by their own mobile phone when they try to have a conversation with them.

These are some of the most important findings from the Center's survey of 743 American teenagers and 1,058 American parents to teenagers from March 7 to April 10, 2018. Throughout the report, "teenagers" refer to 13-17 years, and "parents" refer to parents of at least one child aged 13 to 17.

Teens express mixed views on whether you spend too much time in front of the screens, but half or more have retired at the time they use with different technologies.

Dental life is suffused with technology. The vast majority of teenagers in the US have access to a smartphone, and 45% are online on an almost constant basis. The ubiquity of social media and cell phones and other devices in their teens life has fueled heated discussions over the effect of excessive screening time and the parents' role in limiting teens exposure. In recent months, many major technology companies, including Google and Apple, have announced new products that aim to help adults and teenagers monitor and manage their online usage.

As they look at their own lives and their peers, most teenagers see things that concern them. About nine and ten teenagers are looking to spend too much time online as a problem facing people of their age, including 60% who say that there is a major problem . 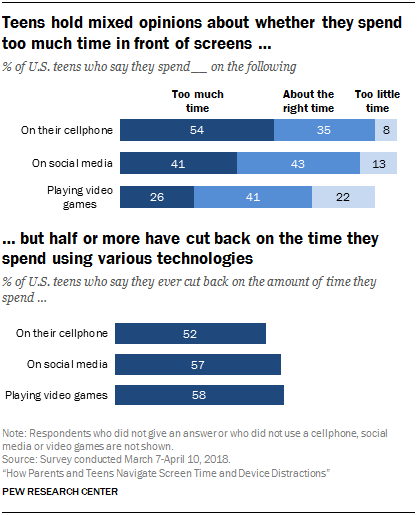 Interestingly, there is little connection between the teenagers view of how much time they spend on different displays and whether they have attempted to limit the time these devices. For example, 53% of the teens who say that they spend too much time on the mobile phone have ever reduced the amount of time they spend on the phone. It's almost identical to the 55% of teens who say they spend about the right amount or too little time on the phone that has tried to limit their mobile usage.

A majority of teens check their phones for messages or messages as soon as they wake up. 44% say they often do this 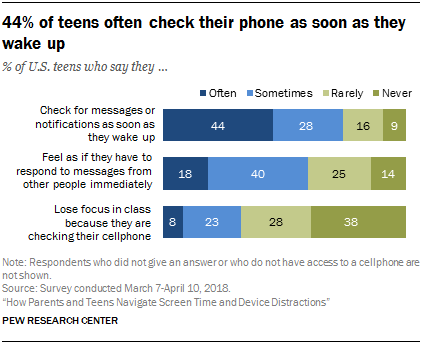 Mobile phones are deeply integrated into everyday experiences from most American teenagers. Most likely, 72% of teens say they at least check for messages or messages as soon as they wake up (44% say they often do this). And 57% often feel or sometimes respond to messages from other people immediately. Meanwhile, 31% of teens say they lose focus in class because they check their cell phone – but only 8% say that this often happens with them and 38% say it never does.

Teenagers across a variety of demographic groups respond in similar ways to these questions about their use of mobile phones. But the teens between the ages of 15 and 17 are particularly likely to say they are looking for messages as soon as they wake up – 49% say they often do this, compared with 37% of teens aged 13 to 14 years. 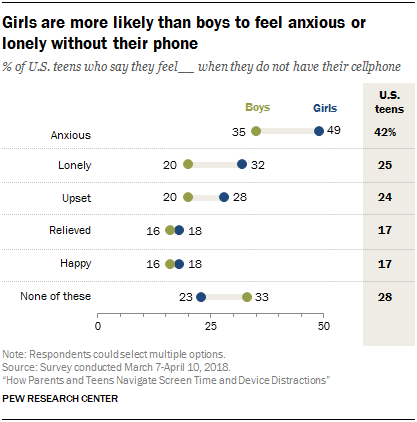 The survey asked about five different feelings teenagers can feel when they do not have their cell phones, and "anxious" (mentioned by 42% of the teens) is the one quoted by the biggest proportion. About a quarter say they feel lonely (25%) or upset (24%) in these cases. In total, 56% of the absence of their mobile phone is equivalent to at least one of these negative feelings. Nevertheless, 17% say that they feel relieved or happy when their cell phone is not around. And 28% say that none of these words describe their feelings when they are without their phones. 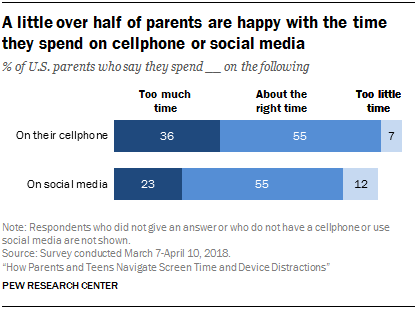 Along with asking teens about their views on screen time and distractions Due to the technologies in their lives, the Center also centered its own survey where parents of teenagers shared their views about a subset of these issues. On a broad level, this survey finds that parents are slightly less concerned with their own use of technology than teenagers are about theirs. About a third of the parents (36%) say that they spend too much time on the mobile phone, and 23% say the same about their social media usage. Just over half of the parents (55% in each case) think they spend the right time on their mobile phone or social media. For the most part, parents of different sexes, races and ethnic groups and income levels report similar concerns about their own technology utilization. 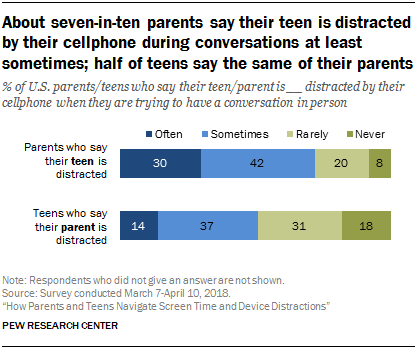 When asked to think about teenager's mobile phone usage, most parents (72%) feel that their teens feel at least distracted by the mobile phone when they try to talk to them. In fact, 30% of the parents say that the teenager often does this. At the same time, this feeling of distraction caused by mobile phones is not a completely teenage phenomenon. When asked about the parent's behavior, half of the teens say the parents are distracted by their own phone, at least sometimes during conversations between them (51%), with 14% of the teens reporting that their parents are often distracted this way.

Compared to teenagers, parents are less likely to check their phones as soon as they wake up – but are more likely to report distractions from home 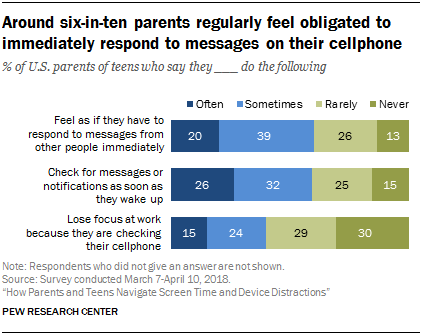 When answering questions related to their use of mobile phones, parents and teens differ in some ways, but not in others. Teenagers are much more likely than parents to say that they often check their cell phone for messages or messages as soon as they wake up (44% versus 26%). However, similar stocks of parents and teens often feel like responding to others' messages immediately (18% of the teens and 20% of the parents say this). And the parents are actually more likely than teenagers to report unintended interference due to their cell phone. About 15% of parents say that they often lose focus on work because they check their cell phone – doubled the proportion of teens (8%) who say they often lose focus in the class for that reason.

About two thirds of parents are worried their teenager spend too much time in front of the screens; A little smaller percentage limits how often your youth can be online or on the phone. 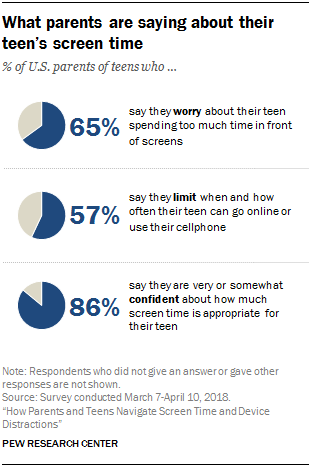 While teenagers opinions about whether they spend too much time on technologies, the parents differ largely in the fact that too much screening time for the teenager is an area of ​​concern. Overall, around two thirds of the parents (65%) say that they somehow worry about the youth spending too much time in front of the screens, with one third saying that this concerns them much . In addition, more than half of the parents (57%) say that they limit when or how long the youth can go online or use the mobile phone, including about a quarter that says they often do this. Using a somewhat different question formulation, a survey of parents in the 2014-2015 Pew Research Center showed that a similar proportion of parents said they had ever set time limits for their teenagers.

Parents across demographic groups report similar levels of concern over their adulthood, but certain subgroups are more likely than others to say that they set time limits for their youth screening. Most especially, parents in adolescents aged 13 to 14 are significantly more likely to set time limits than parents in adolescents aged 15 to 17. Completely 71% of the parents of younger teenagers regularly do this, compared to 47% of the parents of older teenagers . This finding is also in accordance with the Center's previous survey of parents and teens. In addition, mothers with teens are more likely than father to say that they often or sometimes limit how long or when the children can go online or use their mobile phones (62% versus 51%).

On the other hand, parents of boys and girls are equally concerned that their teenagers spend too much time in front of a screen, and the parents are also about to set the screen limit for boys and girls.

Interestingly, parents expressing increased concerns about their teenage exposure are more likely to say that they set time limits on the screen than those who do not. Some 63% of parents who care a lot or something about their adolescence say they at least sometimes limit their behavior, but that proportion falls to 47% among parents who do not worry too much or not at all.

Not only most parents take measures to limit their youth's screening time, but most parents are at least confident that they know how much screening time is appropriate for their child (86%). This pattern applies across multiple demographic groups such as gender, race and ethnicity and education. In fact, four to ten parents very are convinced of the correct amount of screen time for their teenager.