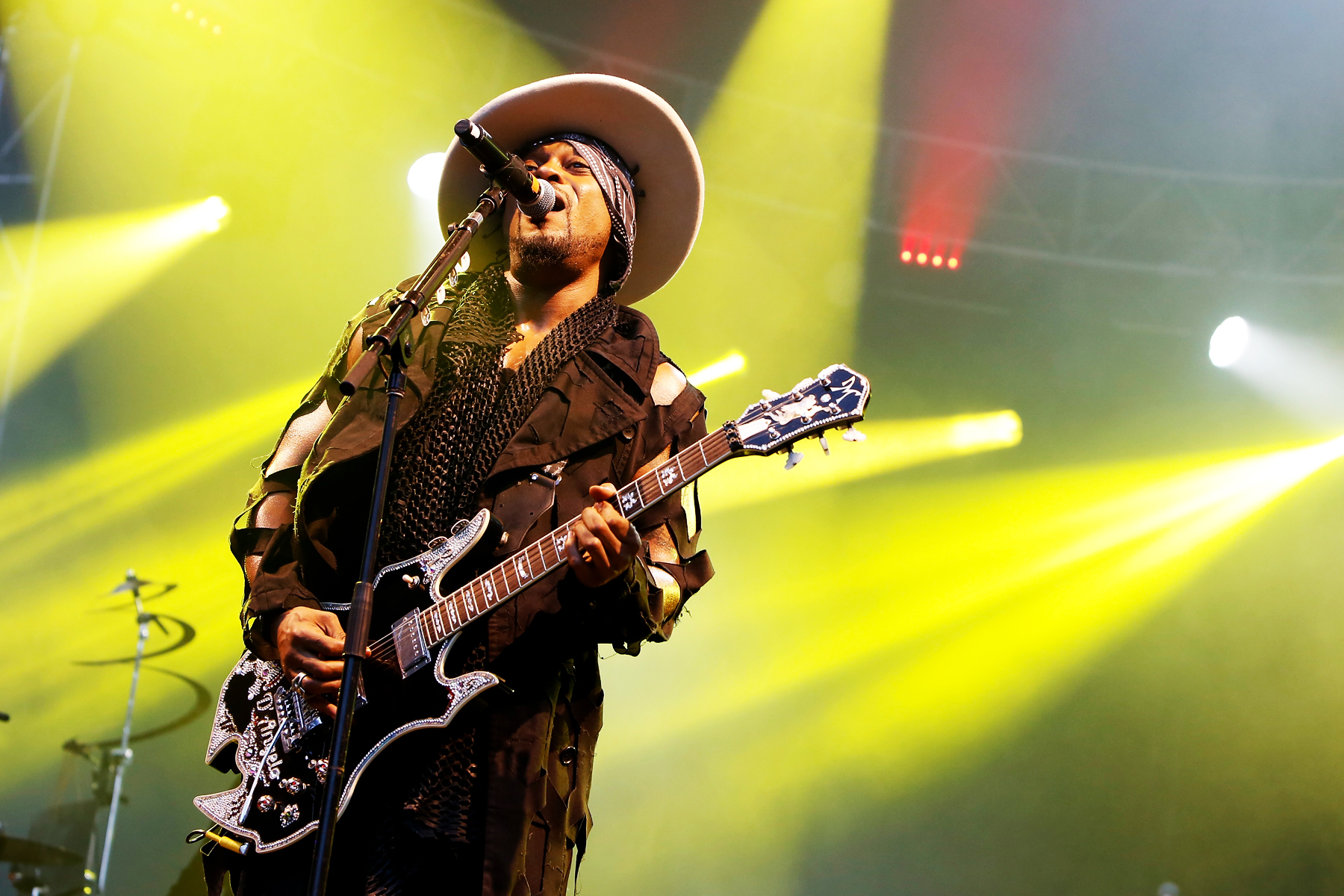 There are few contemporary working artists who maintain a more idiosyncratic release schedule than D'Angelo. He is famous for tinkering and reviewing his music, eating up years and hundreds of reels of analog tape on his way to an eventual album. It took him 14 years to follow up 2000's smash hit Voodoo with his most recent album, Black Messiah . In that time, three U.S. Presidents occupied the White House, Facebook was invented, and D'Angelo released exactly zero songs.

So it was a surprise when a new D'Angelo track title " May I? Stand Unshaken " quietly appeared on YouTube recently. Even more startling: In many of the bootleg clips D'Angelo's new song soundtracks footage from the wildly popular video game Red Dead Redemption 2 .

That's because the only way listeners can legitimately get their hands on "May I? Stand Unshaken, "which has not been officially released yet, is by buying a copy of the game. "Even RCA [D’Angelo’s label] had no idea we were doing a song that's potentially a hit!" Says Daniel Lanois, a veteran artist-writer-producer who has a longstanding working relationship with U2 and Bob Dylan and helped craft " May IN? Stand Unshaken, "along with the other vocal contributions to the Red Dead Redemption 2 soundtrack. (Representatives for D'Angelo and his manager did not respond to requests for comment.)

Much like a typical D'Angelo album, Red Dead Redemption 2 has been many years in the making: The previous entry in the series came out in 2010. The company tests its games as they are in progress, and one singer was particularly eager to try it out. "D'Angelo's actually a massive, massive, massive fan of the game – more than I ever knew," says Ivan Pavlovich, Director of Music and Audio at Rockstar Games, the company behind Red Dead Redemption 2 and other gaming hits like Grand Theft Auto .

D'Angelo reached out to Pavlovich through an unnamed intermediary. "He would come in here [Rockstar’s New York city office] and just play the game. We were not even talking about doing music, "Pavlovich says. "When D'Angelo comes through, he shows up at midnight, and he's playing the game until four in the morning. Hver gang han var lige, 'it's incredible.' It just blows his mind. He's such a fan. I've never seen anyone that excited. "

D'Angelo's enthusiasm emboldened Pavlovich to ask the singer if he was interested in contributing music to the game. (Though the game also includes singing from Nas, Rhiannon Giddens, Willie Nelson and Josh Homme, most of the score is instrumental.) And when D'Angelo agreed, that gave Pavlovich extra leverage to recruit Lanois to supervise the vocal parts of the soundtrack . "The invitation was," would I write songs? "" The producer remembers. "And then they said," we might be able to hook you up with D'Angelo. "That's all it took. I love D'Angelo, and always appreciated those great R & B records he made. "

Lanois says he was aware of the mythology surrounding the singer's release schedule. "[Rockstar] were not sure they'd get a track because they know it's hard to get one finished," he adds. But, "part of my technique is to remain naive and completely oblivious."

"When D'Angelo comes through, he shows up at midnight, and he's playing the game until four in the morning."

"May IN? Stand Unshaken "is actually a combination of two different songs. The chorus, which was penned in New Orleans, stems from a Hindu proverb that Lanois' co-writer, Rocco DeLuca, had on his phone. With a sketch of that track, the producer headed to New York to join the R & B singer in the studio. "We had another song in mind, child or a 6/8 rock track that D'Angelo loved," Lanois says. "We went after that initially, and it did not pan out."

So Lanois decided to change direction. "I had a New Orleans groove in my back pocket, a percussion track with Brian Blade [Joni Mitchell, Bob Dylan] on the drums and Cyril [Neville, New Orleans R&B royalty, thanks to his work in the Meters] playing cowbell," Lanois says. "I fished that out, tied the 'Unshaken' chorus on top of it, and then D'Angelo loved what he heard. He's a great Fender Rhodes [electric piano] player. He played that, I did the guitar, we sang the chorus together as we played the instruments about that rhythm track. "The recording process took a week and a half."

" May I? Stand Unshaken "is from the meditative wing of the D'Angelo catalog, a quiet plea for courage as another test looms. He trades versus Lanois about a thread of guitar, soft keyboard jabs and don't-wake-the-baby percussion. The icing here, as with many D'Angelo songs, the close harmonies are strewn beautifully around the lead. "He has a wealth of knowledge on the formation of backing vocals," Lanois says. "I was very humbled by his capacity."

"Put yourself in my shoes," Lanois says. "I'm a French-Canadian kid from Smallsville. Suddenly I'm in New York working with D'Angelo. I'm pinching myself! "

After finishing the track, the producer called Rockstar headquarters. Pavlovich recalls, "He said," I think it's one of the best things I've ever done. ""