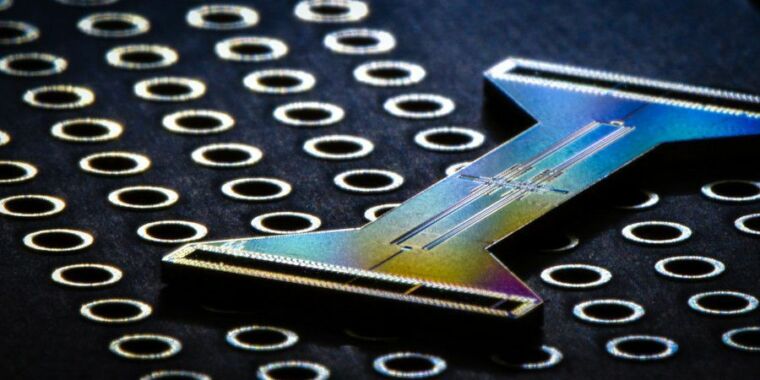 About a year ago, Honeywell announced that they had entered the quantum computing race with a technology that was different from anything else on the market. The company claimed that because the performance of qubits was so superior to the competition, the computer could do better at an important reference value for quantum computing than quantum computers with far more qubits.

Now, about a year later, the company finally released a paper describing the performance in detail. But in the meantime, the competitive landscape has changed considerably.

Unlike companies such as IBM and Google, Honeywell has decided to use superconducting circuits and to use a technology called “trapped ions.” Generally, these use a single ion as a qubit and manipulate the state using lasers. There are different ways to make ion trap computers, and Honeywell’s version is different from another on the market, made by a competitor called IonQ (which we will return to).

IonQ uses lasers to perform its operations, and by carefully preparing the light, the computer can perform operations on several qubits simultaneously. This essentially allows two qubits in the system to perform a single operation and allows IonQ to build a complex entangled system. This is in contrast to the behavior of quantum computers that use superconducting circuits, where each qubit is usually only connected directly to its nearest neighbors.

Honeywell’s approach also allows two qubits to be connected to each other. But it is done by moving ions next to each other so that a single pulse of light can hit them both at the same time.

This works because Honeywell’s ion traps are not made of a static arrangement of magnetic fields. Instead, the fields are generated using 192 electrodes, all of which can be controlled independently. This allows the device to create places where the magnetic field varies in strength, leading to the creation of a place where the ion is happier to live – technically referred to as a “potential well”. By changing the charge in these electrodes, potential wells can be made to move up and down the linear unit, and the ions will simply move with them.

By merging two potential wells, the ions they contain can be brought together so that an operation can simultaneously affect them both. Once done, the well can be split, taking the ions back to their original location.

What is new in the newspaper are some hard numbers for how well all this works. Honeywell says that the maximum time it takes to transport an ion from one end of the trap to the other is 300 microseconds. Transport errors – such as sending a qubit to the wrong location – are automatically detected by the system, so that everything can be reset and calculations can be retrieved from the last point where the condition of the machine was read. These errors are also extremely rare. In a series of 10,000,000 operations, a transport error was detected only three times.

But it is not the last of the results that is documented here. Honeywell also turned to quantum volume, a measure originally defined by IBM that takes into account the number of qubits, how connected they are, and how well they avoid generating errors instead of the intended result. If the system can perform operations involving random pairs of qubits without error two-thirds of the time, the quantum volume two is raised to the power of the qubit count. Higher error rate lowers quantum volume; several qubits raise it.

In this case, the Honeywell team ran tests with two, three, four and six of the unit’s qubits. Everyone cleared the obstacle, with flawless operation, usually in the range of 75 percent for the various qubit counters. Given the six qubits, it results in a quantum volume of 64, which at the time the manuscript was submitted for review, was record high.

But again, at the time. There is some good news from Honeywell’s perspective, in that the company has added more qubits without increasing the error rate, giving itself a quantum volume of 512. By comparison, IBM only reached Honeywell’s previous mark of 64 this past summer using a machine with 27 qubits, but a higher frequency.

But it is also the other ion-trap computing company, IonQ. Previously, it had been in a similar place as IBM: more qubits, but more errors. However, it managed to roughly triple the qubit count while raising the qubit quality to be comparable to Honeywells. With low errors and the large increase in the number of qubit numbers, the quantum volume comes in at over 4 million, which is quite a lot higher than 512. And while it took about a year for Honeywell to add two qubits, at the time of the announcement, Sa IonQ that it is expected to double the qubit number to 64 within eight months – which is now less than three months away.

That said, Honeywell has clearly identified where the bottlenecks lie. One problem is the noise in the voltage generators that conduct current into the electrodes that control the ions. Another is spontaneous noise in the system. Clean up both of these, and performance will increase.

In addition, you add some energy to the ions as they move around the ions, requiring them to be constantly cooled again while the machine is running. To prevent the cooling process from interfering with qubits, Honeywell captures a second ion from another element at the same time and cools it, making it an energy sponge for its partner. This is a big time waster while the machine is running, so increasing efficiency will increase speed.

Beyond that, the basic control system scales linearly – literally, but only up to a point. Add more electrodes in line with the rest, and you can simply capture more atoms. The point where this scaling ends is when it takes too long to move an atom from one end of the row to the other if necessary. It is not clear when this point will be reached, but Honeywell is already considering ideas such as two-dimensional arrays of traps and the transfer of ions between devices.

In any case, the publication itself is informative in two ways. It takes what was an enthusiastic company report a year ago, and finally provides the details needed to fully appreciate what was done, and with the validation of peer review. But the fact that the system that was used to generate the results has become poorly obsolete at the time it took the paper to get through peer review, gives us a real sense of how exciting the field has become.