Well, the scenario of this fast-paced series of drag races could not be much longer than what we just described. First, it takes place on a general airstrip at the airport, but the surrounding settings are just gorgeous, and the weather tends to hold up the end of the trade.

Then there are the three cars involved. We have two of the most exciting Porsches – albeit the older 991.2 versions, but still good machines – 911 GT3 RS and 911 Turbo S, as well as the best Mercedes-AMG GT version this side of a black series ̵

The winner is not exactly a mystery. Being the only four-wheel drive car in the lineup and packing more power than the GT3 RS, unless the driver forgets to release the parking brake or something, the Turbo S is guaranteed to win it every single time. But what about second place?

Well, on paper, it seems that AMG is the favorite. The GT3 RS ‘4.0-liter naturally aspirated flat-six is ​​no match for the GT Rs 4.0-liter twin-turbocharged V8, with the latter delivering 85 horsepower and 177 lb-ft (240 Nm) of torque more. Of course it is also a heavier car, but experience tells us that beyond a certain power level, extra kilos do not tend to be so important.

What matters, though, is traction, and the 911 GT3 RS seems to have it in abundance. It starts with much more aplomb than AMG, and leaves the GT R to play with in almost the entire race. Porsche wins the first head-to-head races against Merc, but there is not much in it. In addition, the GPS measuring unit does not take into account reaction times, while with the naked eye it can give the impression of a larger gap.

The second race is the perfect example: the GT3 RS is the first to cross the line, but the time was worse than the AMG GT R in 0.02 seconds. The races on the Mercedes-AMG are getting better and better, probably thanks to the tires being heated up, but after four races the 911 Turbo S jumps in and it’s over for everyone else. 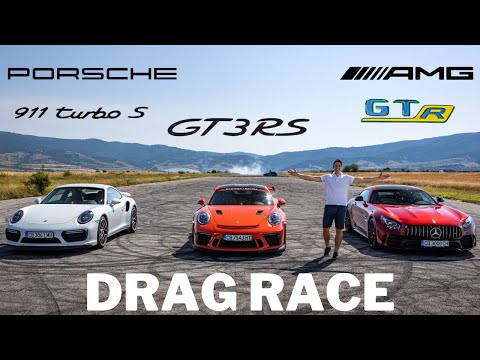