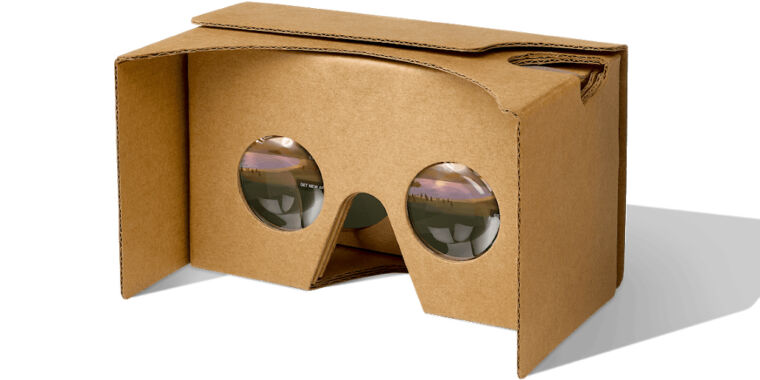 Google Cardboard was a surprising hit on Google I / O 2015 and moved the entry point for VR lower than anyone had previously imagined. The device was a literal piece of cardboard, shaped like a VR headset, with special plastic lenses. Google built a Cardboard app for Android and iOS that would let any suitable high-end phone power the headset. The landscape display split in left and right view for your eyes, the phone’s hardware provided a VR game, and the accelerometers did 3-DoF (degrees of freedom) head tracking. There was even a cardboard action button on the handset that would touch the touch screen with a capacitive pad, allowing you to aim with your head and choose options in a VR environment. Since the product was just cardboard and plastic lenses with no electronics at all, Google sold the headset for only $ 20.

After cardboard, Google began to increase its VR ambitions. In 2016, Google also launched an upscale version of Google Cardboard, the Google Daydream VR headset. This was a plastic and cloth version of a phone-powered VR headset, with the main improvements of a headband and a small controller, for $ 80.

In 2018, Google even roped OEMs to create standalone Daydream VR hardware, so instead of being powered by a phone, Android and all the usual phone pieces were integrated into a standalone VR headset. The first one announced was the Lenovo Mirage Solo.

As in many other areas, Google was very enthusiastic about VR for a few years, and then the company quickly lost interest as it did not see immediate success. The VR shutdown began in 2019, when Google omitted Daydream support from Pixel 4 and killed the Daydream VR headset line. Google issued a VR post-mortem statement stating that there was opposition to using a VR phone, which cut off access to all your apps, and that the company had not seen “the broad consumer or developer adoption we had hoped for.” It was also around this time that Google opened the Cardboard project. VR support in Android was removed from consumer phones with the 2020 release of Android 11, and Google discontinued the Tilt Brush development in January 2021, and chose to open the source code for the app under Apache 2.0.

Google may have stopped using VR, but Cardboard and Android’s VR legacy continues. Android will continue to stay in VR for a long time, even though it is not officially sanctioned by Google. Oculus and Samsung originally teamed up with Gear VR, a fancy, plastic VR viewer powered by Samsung’s Android phone line. While Samsung has stopped using phone VR, all of Oculus’ standalone “Quest” VR headsets are still running Android. Standalone VR headsets are always powered by ARM chips and other off-the-shelf smartphone parts, so Android – but fork or removed you want to make it – will be a top choice to power this smartphone adjoining hardware. It already has all the hardware support and APIs you could want, so why reinvent the wheel?

Three years after Cardboard, Nintendo took the “cheap cardboard accessories” idea and ran with it, creating Nintendo Labo products. Lab-packed Nintendo Switch software with a boatload of pre-cut, printed cardboard sheets, which can be assembled into all kinds of inexpensive peripherals, such as a cardboard piano or a robotic suit. The Labo VR Kit was an exact Google Cardboard copy: a cardboard VR headset used the Nintendo Switch as a display so you could see Nintendo’s worlds in 3D.

Google’s VR division has turned its attention (at least for a while) to AR instead of VR. Google’s ARCore framework allows developers to create augmented reality apps for Android and iOS, and the company regularly posts AR enhancements on Android phones. With Apple reportedly working on a VR headset, you have to wonder how long Google’s unstable product direction will be able to stay away from VR.