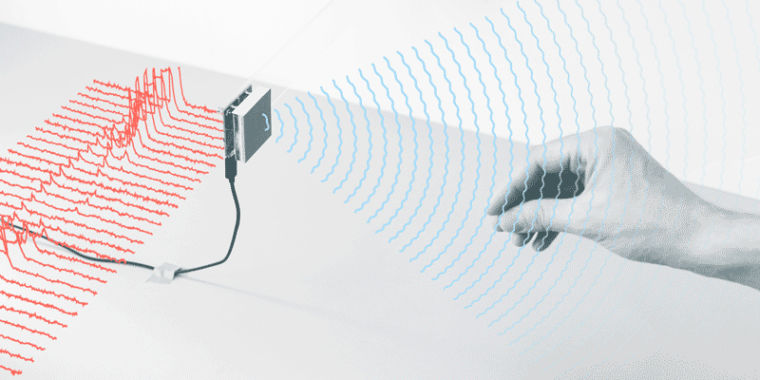 Google's radar-based gesture control system for mobile devices, Project Soli, is not yet dead. The project, which was announced back in 201

5, has appeared on the FCC, where it has been approved for use in the 57 to 64 GHz frequency band.

Project Soli's goal is to build a small radar system on a chip that can be used to detect hand movements over a unit. Soli is only at the trial stage right now, but Google usually places Soli as a concept management system for smartwatches, speakers, media players, and smartphones. Generally, the displayed gestures are displayed as tapping the thumb and index finger together so that a virtual button taps or rubs the two fingers together to roll or rotate a wheel. The idea makes the most sense for small devices like a smartwatch, which does not necessarily accommodate a significant touchscreen and many buttons. It can also have benefits for users with limited mobility.

The FCC's decision actually allows Google to use Soli at higher than the current power levels, which apparently needed to make the chip work. Google originally wanted power-level approval in line with European Telecommunications Standards Institute standards, but was talked down, strangely enough by Facebook, who was concerned about interference issues. Facebook is interested in 60 GHz broadband through its "Terragraph" project.

The FCC said that the decision "will be of public interest by providing innovative device control features using non-contact hand motion technology."

ATAP's sketchy track record [19659008] The biggest news coming out of the FCC documents is just that Project Soli is not dead. The project is being developed in the Google Advanced Technology and Projects Department (ATAP), which is notorious for announcing key projects that never see the light of day.

Google's ATAP division was started by Regina Dugan, former head of DARPA, back when Google owned Motorola. The group was created as a mobile-centric skunkworks with projects focused on a two-year timeline, on which they would be spun by ATAP as a stand-alone project or closed. The group has generated a lot of press coverage, but very little in the way of effective product launches. Usually, ATAP's projects are announced, hyped up, and then canceled annually or never heard again. Given that Dugan once said that ATAP should be "unnecessary for errors", it seems that the low-impact rate should be part of the Group's design.

It was Project Ara, a system for building modular smartphones, developed for three years, often delayed and finally canceled in 2016. "Project Abacus" was a crazy smartphone authentication method announced in 2015 that would use all sensors in a phone – front camera, microphone, GPS, touch screen and more – to continually approve a user with a "trust score" and ease the need for a password. The idea sounded like a big battery chop, but we will never know since the project was quietly killed at some point, or at least it was scrubbed from the ATAP website and has not been mentioned for years. Project Vault was an SD card with a secure data processing environment on board, and required separate approval for access. Vault was another 2015 project that clearly disappeared, but there is a sleeping stock here.

For ATAP projects that actually saw the light of day, it was Project Jacquard, who saw the Google team up with Levis to create a $ 350 jeans jacket with a small touch panel in the sleeve. The most successful excursion was probably Project Tango, which was a 3D sensing smartphone loaded with specialized sensors. Tango was eventually canceled, with much of the software work rolled into Android's ARCore, which uses a more limited AR kit using standard smartphone hardware. To count software (every other ATAP project is hardware-focused), the group produced Google Spotlight Stories, which is a 360-video format.

Besides the already launched Jacquard and Spotlight stories, Soli is the last remaining project on the ATAP website. Apparently, a few developer packages were offered to a select group in 2016, but since then we have not heard much from the project. Will we ever see it in a commercial entity?