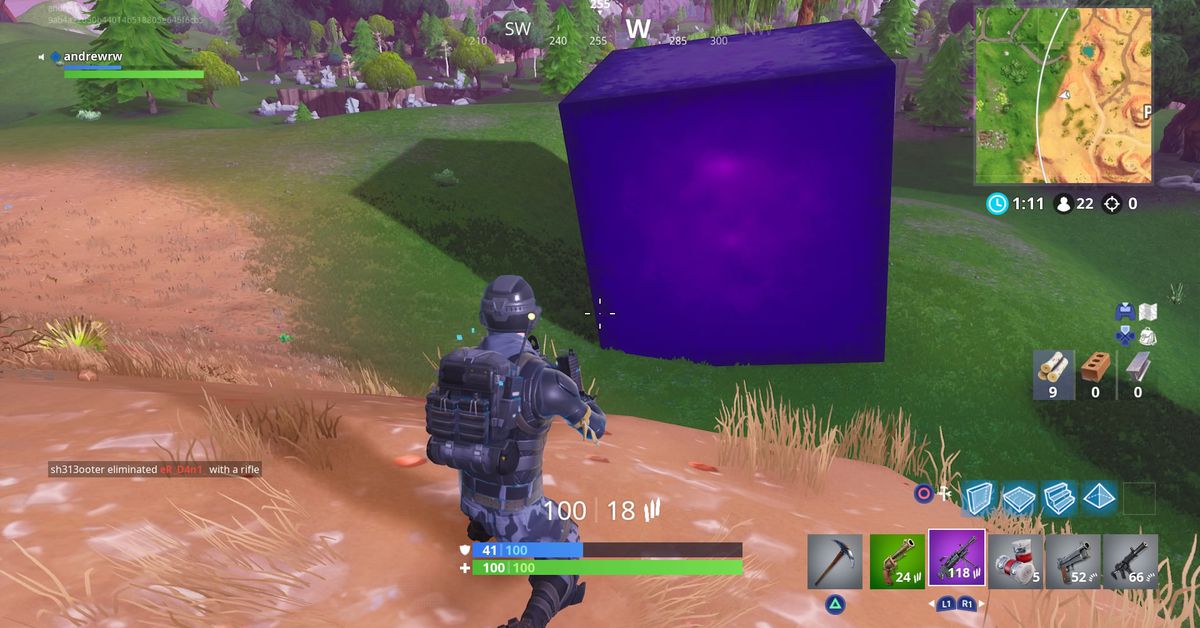 Last night, not long after I let my children go to bed, I made some coffee and turned on my PS4 to play Fortnite . It would not have made the best spectator experience: I sat up on an in-cliff for several minutes, barely moved. I did not play, trying to avoid detection from other players. I was not even armed. Instead, I stared intently on a giant little dice, hoping it would move. Five minutes in the match – where I somehow remain unfortunate – my patience was rewarded. The rear of the cube stepped slightly into the air, swung for a few moments, and the big box rolled forward until they sat down in a motionless position.

This is what Fortnite has done to me. I spend my time occupied by a mysterious cube.

Everything started last week. Fortnite evolutionary island had been relatively quiet for some time, but after a major update things changed. There was a weird temple dedicated to tomatoes, and new portable rifts that let the players create miniature portals. But more bizarre were a series of lightning strikes that seemed to occur on a regular basis. Fans thought the strikes were a kind of countdown and they turned out to be correct.

Finally, the lightning somehow gave birth to a big little cube that stood at a height at the edge of the island's desert biomass. In the beginning, it did not matter at all. You can shoot it or swing an ax on it, but the cube can not be damaged. It was only there, unconsciously, faithful explanation and inviting fancyories. Then it began to move. At certain intervals, which fans seem to have found the cube would roll, just a trip, with an unclear destination in mind.

This is not the first major in-game event in Fortnite . In the follow-up to the game's fifth season, alarms that turn off on a mountain base on the island begin. In the end, this resulted in a one-time missile launch, resulting in a mysterious crack in the sky. Rifts began to appear all over the island, and certain objects – such as the sign of a burger bird, for example – disappeared completely. I found myself to check in again on the game a few days, not so much to enjoy the competitive thrill of battle royale, but to see what had changed. I scanned the sky to see if the crack shrank or grew, and I explored cities and forests to check if a noticeable landmark had been missed.

But the dice have experienced another fascination for me. For one thing, the changes are much more obvious. It's easy to track the steep progress of the cube as it rolls along the map, and you can even see its dark mass as you fall on the island. Unlike the missile launch, which was a flash-and-miss-it-event, the cube has several steps. I did not see the first time it moved, but I've managed to see some scrolls since. The recent Android release of Fortnite has helped since I'm able to check in on the game more regularly to observe the strange object's movements. I've found myself playing multiple times every day and when I'm not in the game, I check Twitter for new developments.

I do not know where the cube is going, or what will happen when it gets there. I do not expect any changing moments when it finally reveals its secret. But the ongoing world-building of Fortnite as stupid as it may be at times is also incredibly engrossing. It's a completely different story story than we are used to in video games, especially in the scope of this game, where more than 100 million players share these moments, act theories and post videos. Many of these millions probably ignore the unfolding story, instead focused on winning in the competition arena.

But for the rest of us? We have a dice to follow.