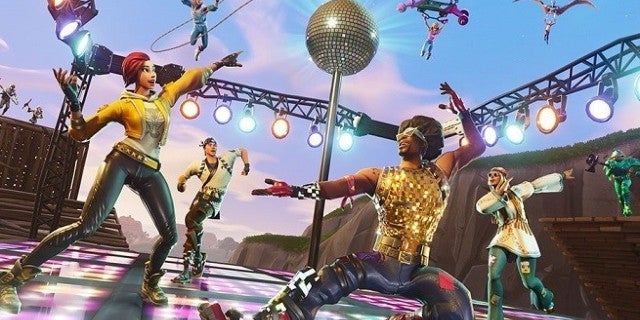 Fortnite players have two returns Limited Time Modes to play before they're gone with Epic Games bringing back the Disco Domination and Sniper Shootout game modes.

Epic Games announced the return of the Disco Domination mode on Sunday while calling it the Holiday Disco LTM. It is one of several game modes that will be introduced during the seasonal 14 days of Fortnite event that includes content updates, LTMs, and challenges for players to take part in.

The weather is getting frightful but dancing is so delightful, you can start celebrating early in the holiday disco LTM! 1

The Disco Domination mode is one that players will remember is a return LTM after it was first introduced back in the v6.02 update. It functions like a Fortnite- styled version of a traditional domination game mode where players have to take control of different dance floors across the map to successfully gain points for their teams.

Instead of simply standing on the command points to capture them, players have to while standing on a dance floor to start the process, but only if there are no enemies present. Enemies who appear and stand on the dance floor will stop a "dance bar" from filling up, and the first team to successfully fill up their bar the whole way will win the match.

Sniper Shootout has also been brought back, a game mode that players have seen from time to time since it was first released earlier in 2018. As its name suggests, this Fortnite LTM is centered around long-distance weapons like the sniper rifle variations including the Hunting Rifle. The game mode appears to be available in Duos as well, so players will need to find a friend to watch while they are sniping.

Fortnite's addition of the two returning game mode came alongside another update that epic games released for the game on Sunday to give players new content while the development team is on a break for the holidays. "Presents" were added in the first of three content updates that will be released throughout the break period, the Presents being a new item that spawns a massive gift which players can then destroy to see what kind of loot it hides inside. It is easy to come across though with the full details of the latest news here. Fortnite's latest update and the LTMs are now live for all platforms.