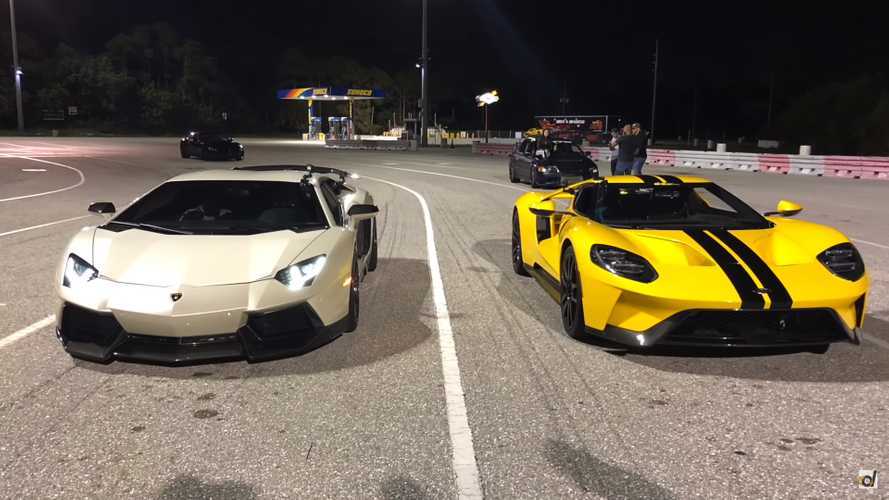 A new video is from our friends at DragTimes, and we are stoked to share it. We see many drag racing actions, but a new Ford GT lining up against a Lamborghini Aventador is not your typical Friday night test and tune competition. It's just the kind of action we are dealing with this time.

Actually, there is a whole fleet of amazing superbiles on hand, not least like a McLaren 720S and a Lamborghini Huracan. There is mention of a Bugatti Chiron that also appears, but the video focuses on the two cars shown above. Not that there is a bad thing on some stretch.

Both superfiles are factory stores, and on paper they match up quite darned nearby. Lambo checks in with its large 6.5 liter V12 which makes 700 hp (522 kilowatts), sent to all four wheels through a single clutch gearbox. The Ford GT factory has half-cylinders and almost half of the displacement, but two turbos help 3.5-liter V6 to produce 647 hp (482 kW). In Ford, the power flows strictly to the rear wheels through a seven-stage dual-coupling transmission. The distribution difference is offset, with the Ford GT which is lighter with 136 kilos.

Before you set up, the Ford GT made a couple of timed solo-kilometer passes and clicked by an impressive 10.85 at 131 km / h. VBox data showed a zero to 60 time of 3.1 seconds, so that the rear-wheel drive GT certainly was a good bit of the starting line.

For the actual side-by-side racing, the Lamborghini driver did not want to "crush the clutch" according to the video, so the cars went from a roll on the starting line instead of a stationary launch. It's a bit unfortunate as it would be quite interesting to see these supercars launch from a dead stop, but the rollercoaster is still quite darned close.

We let the video reveal the result, but our screenshots tell the story. Perhaps Aventador should have challenged a grave after all.