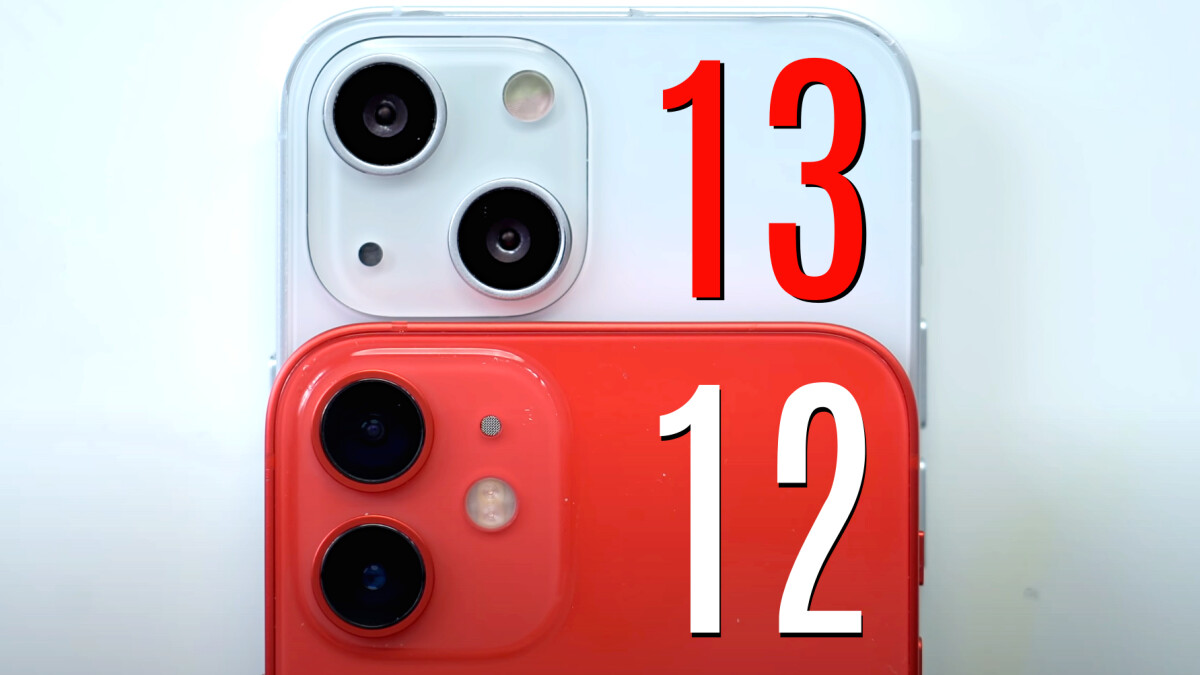 series of phones. The overall size of the units is expected to be the same. They also retain the new flat design, OLED screens, etc.

It is also quite a given that we get the long-awaited 120Hz refresh rate on the iPhone 13 Pro and iPhone 13 Pro Max, but also an ever so slightly different camera arrangement.

We have already discussed why the cameras on the iPhone 13 may have a diagonal orientation, and although the thoughts shared in this story are completely valid, the reason for the change may be quite different!

iPhone 12 vs iPhone 13 – the cameras move, but why? Image courtesy of MacRumors.

Now you may not have heard of this, but in a nutshell – the iPhone 12 series of phones has a pretty big camera problem that has been present since its launch. Some call it “lens flaring”, some call it “lens reflections”.

When you take pictures and especially videos in low light situations, and you point the camera at a strong subject (or rather a few of them) such as street lights, signs, windows, etc., you are greeted by a lot of dots and reflections. This can completely ruin the image and make it unstable.

Is it a big deal? Yes! Of course it is. Especially on a $ 1000 smartphone that comes from a trusted company like Apple. Is it as bad as the exploding Galaxy Note 7 or the flexible iPhone 6? No, but it is definitely enough for some people to return their devices. For the record, I sold the iPhone 12, but this was not the only reason.

In fact, many have done the same. Several videos on YouTube shows the problem, and people who find the problem unacceptable continue to return iPhones.

Is the lens flare problem on iPhone 12 present on other devices?

In a way. Is it that bad? Feel free to. Lens reflections and flare are typical of all types of consumer cameras. As mentioned above, lens flare is caused by a strong light source. When this light source is too light, enters the lens, and then hits the camera’s digital sensor, we get the so-called “lens flare”.

This is normal, and it even serves a creative purpose for specific scenarios where the sun, for example, creates something completely random, but still a beautiful light bend to make an image look dreamy / dramatic.

The thing is – that’s not the case with the iPhone 12. Apple’s device has some of the “classic” lens, but it also introduces some pretty weird dots. Honestly, it is not clear where they come from.

Lens torch problem on iPhone 12 – where does it come from?

We wish we had answers, but we do not. It happens quite a lot with the camera in the iPhone 12 series. Apple brought LiDAR to the Pro models, gave the iPhone 12 Pro Max a big new sensor, so we thought that some of these changes could be the reason behind the “flaregate”. It turns out that this is not possible.

Although most examples uploaded to YouTube are included with an iPhone 12 Pro Max, the problem is also present on the regular iPhone 12, as shown in our examples. Therefore, the LiDAR sensor is out of the equation since the iPhone 12 and 12 Mini simply do not have one.

They also do not have the newer primary camera sensor that is on the iPhone 12 Pro Max, so this is the reason unreasonable also. On top of all that, the Pro models come with three cameras, as opposed to two on the iPhone 12, which means that the number of cameras is not the problem either.

For the record, the problem seems to be present on both the main and zoom cameras of the Pro models (the 12 do not have a tele camera). Not so much on the ultra-wide.

Uuuuh … We absolutely hope so! Image courtesy of MacRumors.

As mentioned, not only will the cameras on the iPhone 13 and iPhone 13 Mini be placed diagonally, but there will be more space between the different lenses. The latter also applies to the iPhone 13 Pro and 13 Pro Max.

It is possible that the reason for the dots and reflections is that the light that hits a lens (the one that picks up) gets together several reflections that come from the surrounding lenses, which of course are also exposed to the same light sources – they have nowhere to hide .

As mentioned here, Apple used a different camera positioning for the iPhone 12 series by placing the primary camera of the iPhone 12, 12 Mini and 12 Pro Max at the bottom of the “camera bar”, while the iPhone 12 Pro main sensor held on top. We are curious to find out if this will change, but we are very happy to see the problem with lens flare addressed!

The iPhone has been known for having the absolute best camera for video, with extremely dynamic range, great colors, exceptional sharpness and image sharpness.

Unfortunately, this experience has been ruined by this mysterious lens flare problem, which in turn – is somewhat present on other phones and cameras, but they are often not that expensive, and as I said before – they are almost not that bad.