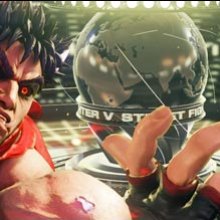 Update: Fuzzy on Twitter has posted a clip of itself that runs into Cake in Survival Mode. This gives us our first glimpse of Kage's game. He is basically Evil Ryu ̵

1; armed with an ax park that expands combinations, a strange appearance of energy, and a red fireball with extra startup.

It's an update that is apparently available. You can see a dark picture of a new character in the training mode's character selection screen. By swinging over him, it is obvious that he is a newcomer known as Kage.

This special fighter comes from looking very demonic. He has red and black eyes, fangs and even horns. Outside these features one can easily confuse him with Ryu.

It is speculated that he has something to do with "Evil Ryu" based on his appearance. It looks like Ryu's headband seems to be sitting on Kage's neck. He is shirtless showing that he has burned or sore on the upper body.

Street Fighter 5's servers are currently down to implement something. It is very likely that this was the intended announcement that would conclude with Capcom Cup 2018.

If so, this is the season 4's first DLC sign. Rumors circulate that Cage is able to fly.

Not much is known about this mysterious fighter outside this information since we have not seen his trailer yet.

In particular, it seems that are some balance adjustments in place. Menat V-Trigger 1 went from being a 2-bar V-Trigger to a 3-bar V-Trigger. Abigail's V-Trigger 1 has also had a measurement requirement of two to three. A list of balance changes is about to be collected.

Volume 4 attempts have also appeared. There are a total of two new attempts for the other 34 characters.

Interestingly, translate "cake" in Japanese to "shadow." This gives some light on the hint that dropped on Friday.

Notice how the Street Fighter 5: Arcade Edition logo supports a shadow? This seems to be the Kage theme.

Cake may be to Ryu what Oni is for Akuma. Oni is Japanese for the demon.