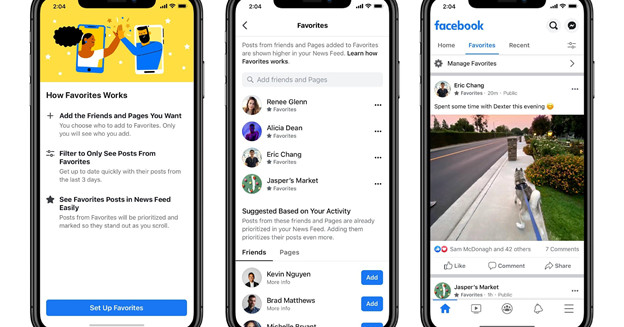 Facebook introduces a handful of new features that will give users more control over their news feed, including an easier way to turn off the feed’s algorithmic ranking and display content in the order it was posted instead.

The changes are based on previous adjustments to the News Feed functionality. In October last year, Facebook introduced a “Favorites” tool that allows users to select up to thirty friends and pages, prioritize content or view it in a separate feed. The company also offers users the ability to sort feeds by “last”, but buries these options in obscure menus.

; and “Recent” filters much more prominent, and puts them right at the top of the news feed as separate tabs that users can switch between. You can see what it looks like in the screenshots below:

This filter line will be launched globally on Facebook’s Android app today and will hit iOS “in the coming weeks.” It is not clear if it will be available on the online version of Facebook.

The filter line disappears if you do not use it regularly

But that’s a big warning: the filter line is not one solid in addition to Facebook’s user interface. It told the company The Verge that the feature will disappear if users do not access the favorite tool in seven days. They then have to find their favorites through the settings menu for the News Feed, and the filter bar returns. In the same way, the “last” tab also disappears if it is not opened regularly.

In addition to the filter bar, Facebook is introducing a new tool that allows users to restrict who can comment on their posts (this can be limited to friends or just to tagged people and pages) and expand the content covered by “Why do I see this?” traits.

This latter tool was introduced in April last year, and allows users to click on posts suggested by Facebook’s algorithms to see why they were recommended. These explanations will now cover suggested posts from pages or people like the users Do not do it follow, and show how the post’s related topics, interactions, and placement led to them being suggested.

These changes are relatively small, but in general give people more control over Facebook’s often opaque algorithms. The changes suggest that the world’s largest social network is concerned with rejecting criticism of choices made by its algorithmic systems. This is not surprising given that the company has repeatedly come under fire due to studies showing that these automated systems amplify misinformation and extremist content in an apparent attempt to increase user engagement – a calculation that governs Facebook’s design choices.

Such criticisms have been leveled at the site for years, but have become increasingly sharp in recent months as lawmakers and the company’s own regulators steer more intrusive regulation of Facebook’s algorithms. With this in mind, it makes sense for the company to give users the ability to opt out of algorithmic sorting altogether.

But as is often the case with Facebook, the company seems hesitant to commit to changes that could undermine its own engagement statistics. If the filter field disappears after seven days of inactivity, it begs the obvious question: is Facebook really serious about letting users choose what they see on the site, or does it just want to give the look control?