Following an investigation by the European Commission, a selection of publishers have been fined € 7.8 million (or about $ 9.4 million) after allegations of geo-blocking practices. 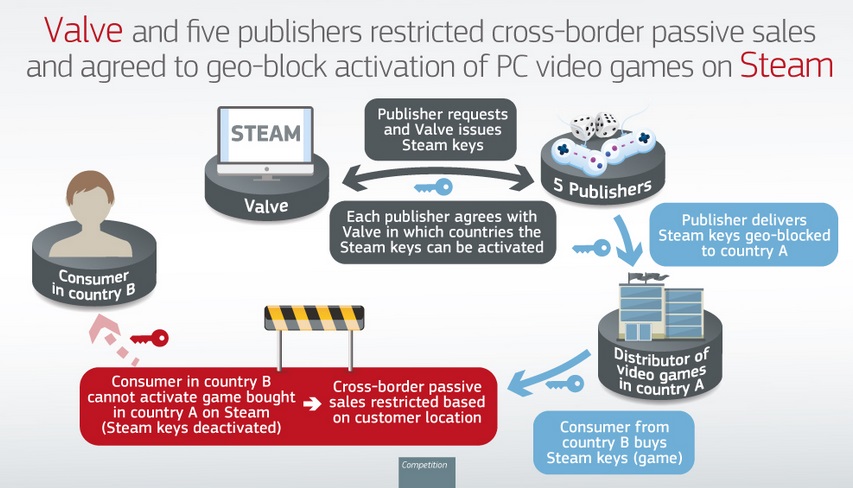 “This business practice denied European consumers the benefits of the EU̵

7;s digital single market in order to shop around between Member States to find the most appropriate offer,” the commission’s official findings state. “The Commission has concluded that the illegal conduct of Valve and the five publishers divided the EEA market in breach of EU antitrust rules.”

The fines for each publisher were adjusted in relation to the collaboration received from each company. Most of the named publishers saw a reduction in punishment. Valve – which allegedly did not want to cooperate with the investigation – was eventually fined € 1.6 million (approximately $ 2.9 million USD). Valve has since stated to Eurogamer that it did cooperate with the Commission and intend to appeal the ruling. Focus Home Interactive received the most severe penalty, with a weight of € 2.8 million (approximately $ 3.4 million USD) even with a reduction.

“More than 50% of all Europeans play video games,” said Margrethe Vestager, Executive Director of the European Commission. The video game industry in Europe is booming and is now worth over € 17 billion. Today’s sanctions against “geo-blocking” practices for Valve and five PC game publishers serve as a reminder that under EU competition law, companies are banned. “Cross-border contractual sales. Such practices deprive European consumers of the benefits of the EU’s digital single market and the opportunity to shop for the most appropriate offer in the EU.”