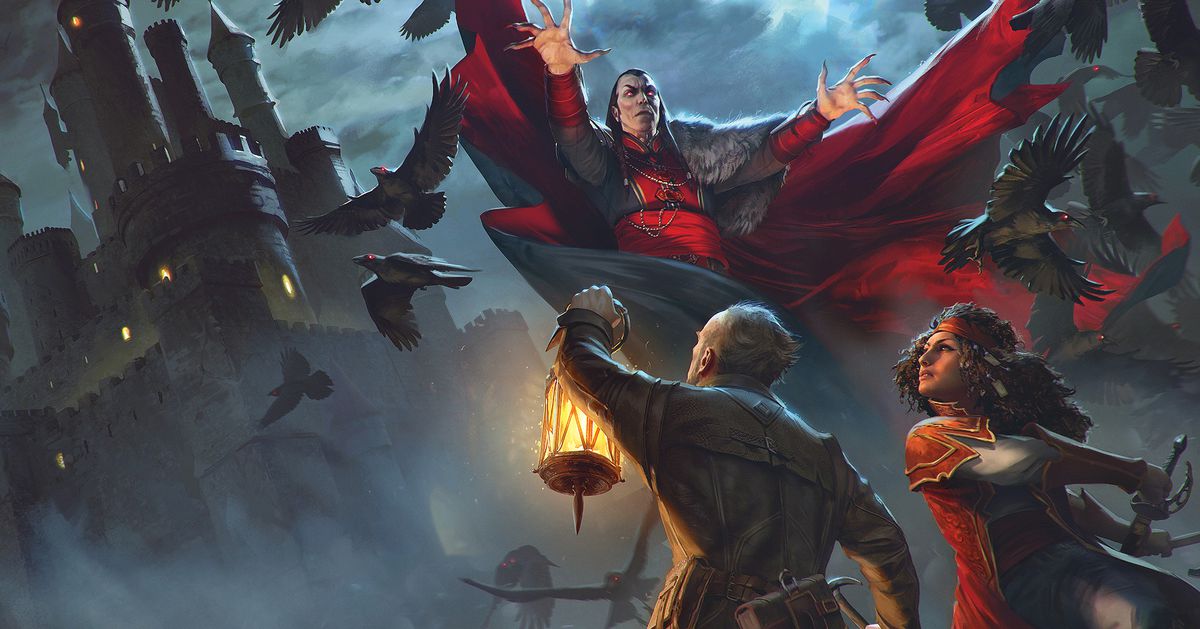 The next campaign book for the 5th edition Dungeons & Dragons is entitled Van Richten’s guide to Ravenloft and it is expected May 18th. The 256-page volume contains 30 new and newly imagined worlds from the Ravenloft multiverse, packaged as micro-settings for your next campaign. Each kingdom comes complete with its own unique villain for players to fight against, plus heroes who are new and old to fight with.

Fans of the popular Curse of Strahd the campaign will know Ravenloft as the vampire’s Strahd von Zharovich, but it is also the name of an expansive campaign setting published throughout the 1

990s. Van Richtens guide will detail the many kingdoms scattered through the mists outside Strahd’s Valley Barovia, and even include guidance on creating your own kingdom of terror. There are many additional options for creating characters related to these kingdoms, plus a brand new 20-page adventure called The Lament House.

“I’m a big fan of all horror,” said Wes Schneider, senior game designer at Wizards of the Coast and chief designer of Van Richtens guide, “So it was an absolute thrill to frame this book around bringing scary elements like mummy masters, cosmic horror and urban legends to multiple D&D tables.”

Like the upcoming one Candlekeep Mysteries, the book will have more authors. Among them are Wizards’ new senior designer Amanda Hamon (formerly Kobold Press), Cassandra Khaw (Nothing but black teeth), Molly Ostertag (The witch boy) and K. Tempest Bradford (Copper carbs).

During a preview of the press, Wizards’ Schneider and Hamon were both ready to tease some of the 30 kingdoms on offer. They include Barovia, of course, where the original Curse of Strahd campaign takes place, but also many more.

Dementlieu, ruled by the cruel Saidra díHonaire, is a twisted view of the fairy tale genre. Lamordia is home to Dr. Viktra Mordenheim, who chases her escaped meat golem, Elise, across the country. Falkovnia has a new ruler named Vladeska Drakov and has been re-imagined as a kingdom on the brink of a zombie apocalypse. It is Kalakeri, which draws its inspiration from Indian folklore and mythology, where dark lords Ramya, Arijani and Reeva each about the battle. The last kingdom that is teased is called Valachan, where the dark lord Chakuna mercilessly hunts for player figures for sports.

Players will have more than just magical items and powerful spells at their disposal. Scattered throughout the fog, other powerful non-player characters will help them on their journey. They include Curse of Strahd’s Esmerelda d’Avenir, the powerful Weathermay-Foxgrove twin, and traveling detective Alanik Ray.

The book will also include a long section on setting safe boundaries to keep everyone comfortable at the table.

“A horror role-playing game is much more personal and is much longer [than a film or a television show]. It also does not have an off switch, “said Schneider during the preview event. “So if someone gets uncomfortable at the table, if it turns out that the whole story is secretly about the worst thing that has ever happened in your life, what do you do about it? How do you avoid getting into that situation, how come you out of it, and how do you make sure your whole gaming team supports these things? “

Van Richtens guide will also include new player options called Dark Gifts, which are features that can help connect player characters with the setting and its themes. There are two new subclasses to experiment with. They include the College of Spirits, which allows players to build a Bard that can change reality by telling scary stories. Meanwhile, the Warlocks can choose to draw their powers from a powerful Undead Patron – perhaps complicating the story by choosing the villain who controls the kingdom where their special campaign is set.

The book will also contain three new potential drawing lines: Dhampir, Hexblood and Reborn. All three were the subject of a recent Unearthed Arcana playtest package. Schneider said that while they act mechanically as races, they can also be something that a character transitions to during an adventure.

“If […] you get experiences with vampires or with gardens, “said Schneider,” and it makes sense to take the story in a direction that fundamentally changes the basis of your character, these lines give you the opportunity to explore it. “

Cultural sensitivities are high on games on the table at the moment, and especially role-playing games. Last year, publisher Wizards of the Coast apologized for racist stereotypes in its modern materials, and promised to do better in the future. Content alerts are now displayed in the back directory, many of which are available digitally. It includes the 1997s Domains of Dread, published by TSR, as Van Richten’s guide to Ravenloft most similar.

“Somewhat older content may reflect ethnic, racial, and gender prejudices that were prevalent in American society at the time,” he said. Domains of Dread content alert on DriveThruRPG.com. “These descriptions were wrong then and are wrong today.”

To avoid repeating past mistakes, Wizards said it worked closely with cultural consultants Van Richtens guide. Most importantly, Wizards emphasized that this campaign book was created for all ages.

“We understand that a lot of people these days are playing with their kids, playing with younger players,” Schneider said. “Horror does not have to mean an R-rated film. It does not just mean for adults. You do not need to bring your parents to see this D&D experience. Horror can be comics like Scooby Doo or like the old Ghostbusters cartoon. Such things have horror elements to them, at the same time as they are action stories, fairy tales, mystery stories, exciting stories. It does not have to be all bloody and visceral. ”

Van Richten’s guide to Ravenloft is now ready for pre-order on Amazon, via D&D Beyond, and on Roll20. An alternative cover with Esmerlda d’Avenir and a special metal finish will be available from local game shops.