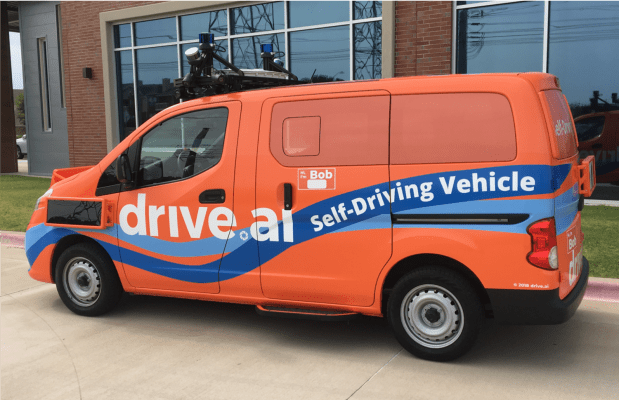 The Soviet community in Frisco, Texas, seems like an unusual place to find a vehicle. But here in this city of almost 175,000 people there are seven.

And from Monday, they are available to the public to use within a particular sector of the city that has a concentration of retail, entertainment venues and office space.

Drive.ai, An Autonomous Vehicle Startup, launched the self-propelled on-demand service Monday that will cover a two-mile route. The service will be operated in conjunction with Frisco TMA, a public-private partnership focusing on "last mile" transportation options. People within this geographical zone can take a trip using a smartphone app.

Although they are small, the modified Nissan NV200es will be hard to miss. The self-propelled cars are painted in a light orange with two swooping blue lines – the words "self-propelled vehicles" and "Drive.ai" in white.

The vehicles, which have been given clear human names like Anna, Emma, ​​Bob, Fred and Carl are equipped with LED monitors on the hood, rear and above the tires that will display messages as well as the vehicle's name to pedestrians.

This is not an enterprise yet. The service, which is considered a pilot project, is free and will be in operation for six months. The program will start with regular pickup and waste disposal around HALL Park and The Star, and then expand to Frisco Station.

Conway Chen, Drive.ais Vice President of Business Strategy, TechCrunch stressed that this is designed as an on-demand service, not a shuttle bus. When the vehicles are not used, they will not only continue to roll around the route, which can cause more traffic loads, Chen said. Instead, they will be able to park along the route.

In the weeks since plans were announced to launch in Frisco, Drive.ai has been tweaking the service, its plan as well as raising miles on the road and in simulation. The company said it has logged 1 million simulated miles on its Frisco route. In the simulation, Drive.ai scenarios replicate taken from the driving logs vehicles encountered while driving the route, as well as creating scenarios.

As Drive.ai explains in a post on media: "It's like a high tech version of SimCity, where we design the world, and then play events and change components to explore how our technology responds in unique scenarios. This is a great place to start for the more common things people do on the roads: navigating difficult crossings, crucial decisions and observing the behavior of cyclists and pedestrians. "

] The service, which will operate weekdays from kl. 10 o'clock 19.00, will initially have a safety driver behind the wheel. That person will eventually move to a passenger seat and take a chaperone role, whose primary responsibility will be to answer questions and make the drivers comfortable. At some point, Drive.ai will remove the employee completely from the vehicle.

The company also has a remote monitoring feature called "telechoice", which allows a human operator to see everything in real time that the self-drive vehicle can see by using HD cameras.

Telechoice is not like the full remote control telephony operation that Phantom Auto provides. The telechoice operator can control basic functions like slowing down, but it can not take full control of the vehicle or make it accelerating. With the Drive.ai feature, if "Bob" is driving the car with a certain situation on the road, the telechoice operator can help make the right decision.