Does this little green point mean that a new AirPods case is near? 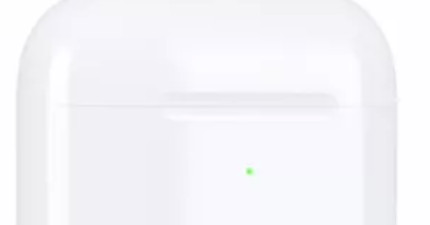 Apple released a recent beta version of iOS 12 today, with a clear look at the next AirPod case, first discovered by 9to5Mac . We had an idea that this case came at a time and that it would probably include a charge status indicator lamp on the outside. The case can also support wireless charging, and we will be sure to hear about it during Apple's annual Harvest Hardware Event, so get ready for this. Now get ready for a zoom.

Here is the newest picture:

Notice something else? Maybe you do not look tight enough.

Now you see it, right? The green little dot also appears in a brown shade in Apple's image, which may mean that the case is low on the battery or is currently being charged. But only if you still do not get it:

See the green dot and what could be Apple's new AirPods carrying case. It looks a lot like the old one, with the exception of, you know, with a green light.