Diablo Immortal will be a mobile MMO, reveals developers at BlizzCon 2021 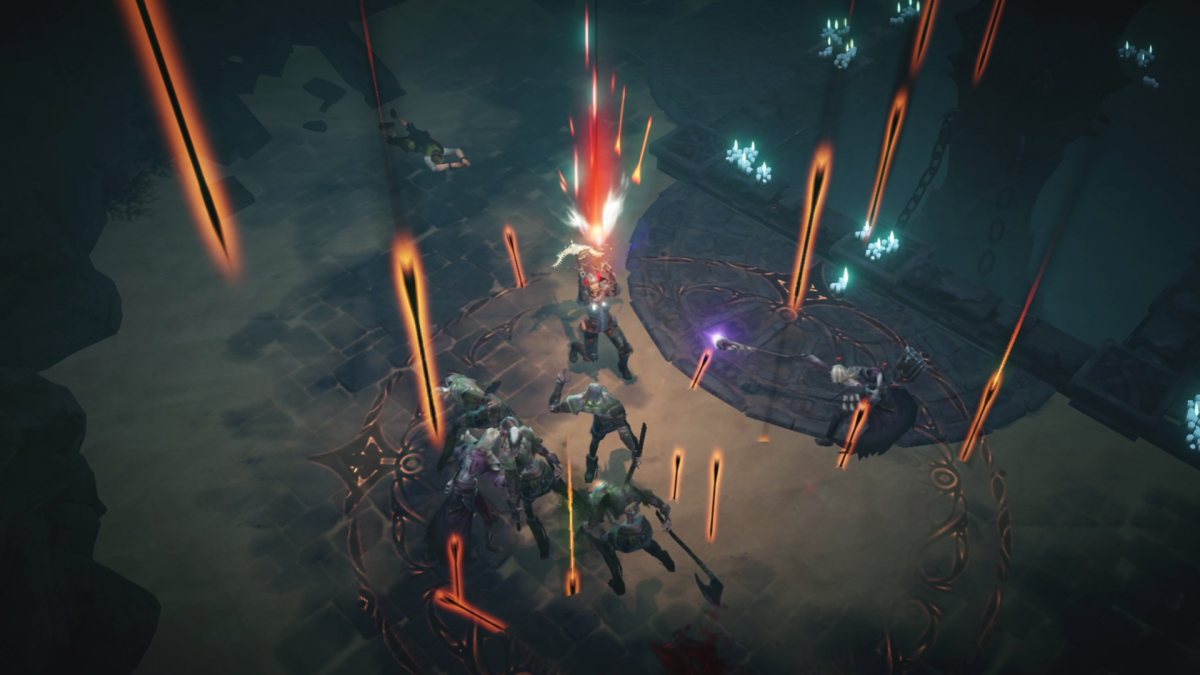 At BlizzCon 2021 we learned more about Diablo Immortal, Blizzard’s mobile entry in the iconic RPG series. After a technical alpha that ended in January, we have a clearer overview of how the game develops – and from the developer’s own accounts, Diablo Immortal is a mobile MMO with tone and games in line with the franchise, but can have a few tricks all their own.

Important things out of the way first: there is no release date yet, and it looks like the next phase will be another alpha, according to a question and answer with the press held during BlizzConline 2021. Blizzard does not announce when the next alpha will take place ( although we got more information about what̵

But based on answers given by Diablo Immortal chief designer Wyatt Chang and combat designer Julian Love, we know more about how the game is built to be an MMO on mobile, but also what adaptations to the Diablo formula are made to make it mobile-friendly while still feeling like a game in the series.

Here are the best insights we gained from questions and answers:

1. It is designed to be a mobile MMO

The big revelation seems to be that the Diablo Immortal team has designed the game to be a mobile MMO – or at least an action RPG with MMO elements such as voice chat, public events and dedicated dungeons to take on with your friends .

We were not able to get all the details in the short question and answer, but we learned that the technical alpha implemented the four-person dungeons we had heard about before. The Diablo Immortal team confirmed that they will also have events with more than four players, which could be major raid-like events in the game – although these are still ambitious, and the game can start without these events.

But the technical alpha had extensive voice chat – not only in your party, but also in public channels. To address the audience, you can leave voice memos: hold down a dedicated ‘record’ button to save a message, and a voice-to-text tool will translate and show other players a summary of your missive, which they can click to hear your sound. This functionality is in the technical alpha that was just wrapped.

The team is also working to implement clans in the game: “we want you to feel that your membership and your participation in a clan is important,” Chang said.

Players will operate outside the city center of Westmarch, and can pass “dozens” of players as they wander around. But more crucial to the MMO experience is “that the world exists outside of you,” as Chang put it, and like World of Warcraft, the Diablo Immortal world is an enduring place that marches on with or without you.

2. The game’s play is suitable for short sessions

Since the game was announced at Blizzcon 2018, players have been mystified how the mobile game will recreate the Diablo experience – or deviate from it. In BlizzConline 2021 Q&A, team leaders talked about the changes in both games and the look and feel of the world to make it work on smartphones.

The Immortal team admitted the challenge of adapting action RPGs to in-screen mobile phone controls, meaning that their fingers will cover some of the action, although they noted that it was easy for players to ‘melt right into the game’, as Chang described the. But a more interesting adjustment was to shape the game so that it could be played in short bursts, which is suitable for mobile games.

As Chang explained, the immortal team designed activities for one minute or three minutes or five minutes, so that it would be satisfying for players who picked up and put down the game for short sessions – and still make it fun for people who play marathon sessions on three . or four hours, as they do with PC and console Diablo games.

They also lit up the game – literally – to make it easier for people to play on their phones in different lighting conditions.

“It benefits the game not to be so dark, because you have players playing in a variety of ambient light situations, and they can really struggle to see anything,” Love said. “This is the type of problem where a gamma button slider does not solve the problem. You really need enough environmental contrast to ensure that the gut action stays present and people can discern what is happening. It’s a very fast paced game. ”

So expect a lighter game, but also one with a tone somewhere between Diablo 2 and Diablo 3, said devs. Presumably, it means a more colorful game than the former’s extensive dark palette, but less vivid than the latter, which was paralyzed at launch to turn away from Diablo 2’s faint, gloomy vibes.

But with these tweaks, the Immortal team is trying to keep the game “feeling” like its PC and console predecessors – although it will likely take trial and error to nail the right approach.

“The biggest thing I care about is ‘Feels like Diablo’, and the only way to find out is to push it out and see if it’s on the right track,” Love said.

Finally, one of the most frequent player requests in the technical alpha was for controller support, which the Diablo team said they were working on.

It will have unique PvP experiences, such as mini-King of the Hill events

While the Diablo Immortal team has not completed its PvP plans, it was a glimpse of what kind of content they create to pit characters against each other in the technical alpha.

In one area found in the early alpha version of the game, a treasure chest would spawn every three hours, which would only open for the last player standing – essentially creating a king-of-the-hill arena around it for the daring to conquer. Whatever player was left had to plunder the chest.

It’s just a preview, Chang said: “Our PVP plans are definitely more ambitious than that.”

4. It will have microtransactions, but all new classes and content will be free

As previously revealed, Diablo Immortal will be a free microtransaction game, but players will not be able to buy equipment that traditionally has to be looted, such as from your enemies. Instead, in-game purchases will allow players to purchase gems and items related to charm. They also plan to have a punching system with free and paid tracks.

The game launches with six core classes, and the Immortal team plans to add more, along with additional areas and content – all of which will be free for all players. No classes, zones or other content will be paid for, according to the team’s current plans.

“Buy in the game should never bypass the game. We want to structure our purchases, so that’s a bonus, and you feel good about it, ”said Chang.

5. It may have gameplay not mentioned in other Diablo games

While Diablo Immortal follows the beloved attitude, characters and gameplay that is established in the PC and console games, and zealously reproduces the experience for mobile, and develops for the platform surprisingly the team provides the opportunity to develop some new elements that would not be possible in previous games.

One of these is a feature that Love has wanted to put in Diablo games for a decade, he says, but because every smartphone player uses the same control scheme, the Immortal team has an opportunity to establish new monster effects – like letting enemies freeze the ground, so that players glide everywhere, combining it with other environmental effects such as wind.

“You have this whole new problem for players: the ground is slippery, and a wind is blowing towards you this way, and if I move with the wind, I’m faster, but I glide everywhere, but if I fight against wind, I does not have traction, ”said Love. “These are brand new issues for the player to solve.”

It is unclear how widespread this effect, or effects like it, is in Immortal, but it is interesting to see how the design area opens up given the apparent limitations – or real possibilities – for mobile.

6. The next technical alpha will probably have content in the playoffs

The technical alpha, which ended in early January, gave players access to five zones and progressed to level 45 to test the midgame of character progression. A future alpha period – will allow players to climb to the game’s final intended hood: level 60.

In other words, players are likely to encounter at least some of the playoff content in Immortal. This is not the end of character growth, of course, as there are prestige points and looting to do. Future alpha phases will also have more search zones and of course the two classes that have not been included yet: the necromancer and the crusader.

An announcement about the next technical alpha is coming soon:

What you saw in Technical Alpha is not all that it is. Another test phase comes to a wider audience with new content, a new class and a great final game. Full panel: https://t.co/KZ8Jw4HShx pic.twitter.com/X73D1mmRUW February 20, 2021