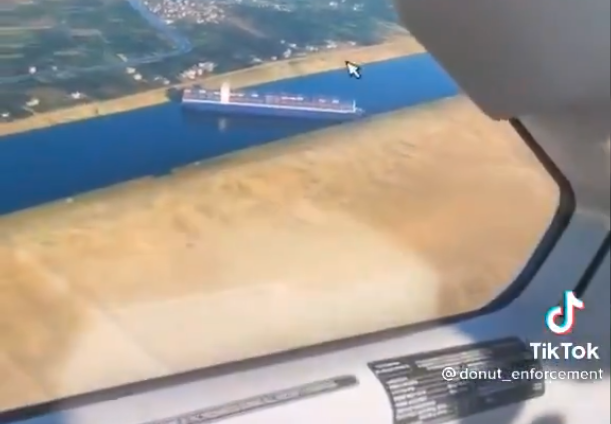 Nothing like a bit of current events mixed with your video game.

The saga of a container ship that has been stuck in the Suez Canal for six days has made its way to “Microsoft Flight Simulator.” A TikTok video shows the view from the cockpit of a passenger plane flying along the busy waterway, and the captain informs the passengers that “this is where most of our world merchant and cargo ships come through.”

The captain then detects the stranded ship and asks the passengers to brace themselves to fly around. “They seem to have a big problem,” he says.

The video was shared on Twitter by Mat Velloso, technical adviser to Microsoft CEO Satya Nadella.

“Flight Simulator”, Microsoft’s longest running product franchise, returned to the skies in August last year with its first update in 14 years. The game leverages technology enhancements, including the use of Bing Maps’ global images and the Microsoft Azure cloud platform, along with artificial intelligence technology that enables live traffic and real-time weather.

The 220,000-tonne ship is causing major problems for the global supply chain, as ships full of everything from cars and oil to livestock and laptops are waiting for salvage crews and tugboats to free the vessel and clear the busy route, according to The New York Times.

The Internet has also been responding for several days with its usual supply of snorts and memes.

With the ability to fly anywhere in the world, ‘Microsoft Flight Simulator’ players choose this special place