Bethesda has announced that it will be giving away Fallout Classic Collection to all Fallout 76 owners who have logged into the game in 2018. As such, those that buy the game in 2019 will not be able to acquire this collection for free.

A good gesture or an apology related to Fallout 76? It started right at the beginning of the game launch, then, the party continued into the game's special edition when owners did not receive the canvas bag that was promised to them. Bethesda gift out in-game game currency to owners to make up for their blunder, however, it's not enough to buy the canvas bag within the game. Maybe this will help, but I am not sure that giving PC games to console players is the right idea. Fallout 76 is currently available for PC, PS4, and Xbox One 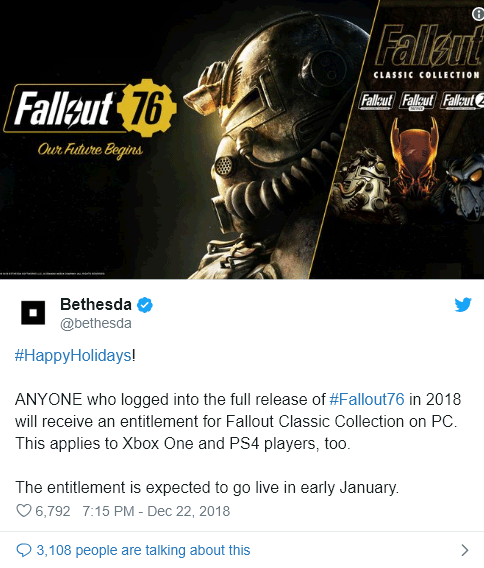 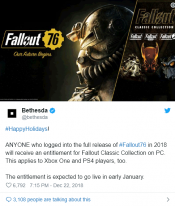 Bethesda Might Have a Security Leak ̵1; 12/07/2018 07:47 AM
Be wary what information you put into your Fallout 76 support tickets because it seems some users have been able to view private information. Reports have been cropped up saying things like receipt scr …

Bethesda hints at new Fallout game – 05/30/2018 08:08 AM
Bethesda is teasing on social media and that points to something new for the Fallout series. Details are scarce though, it might be a new game or just a Fallout 3 remaster.