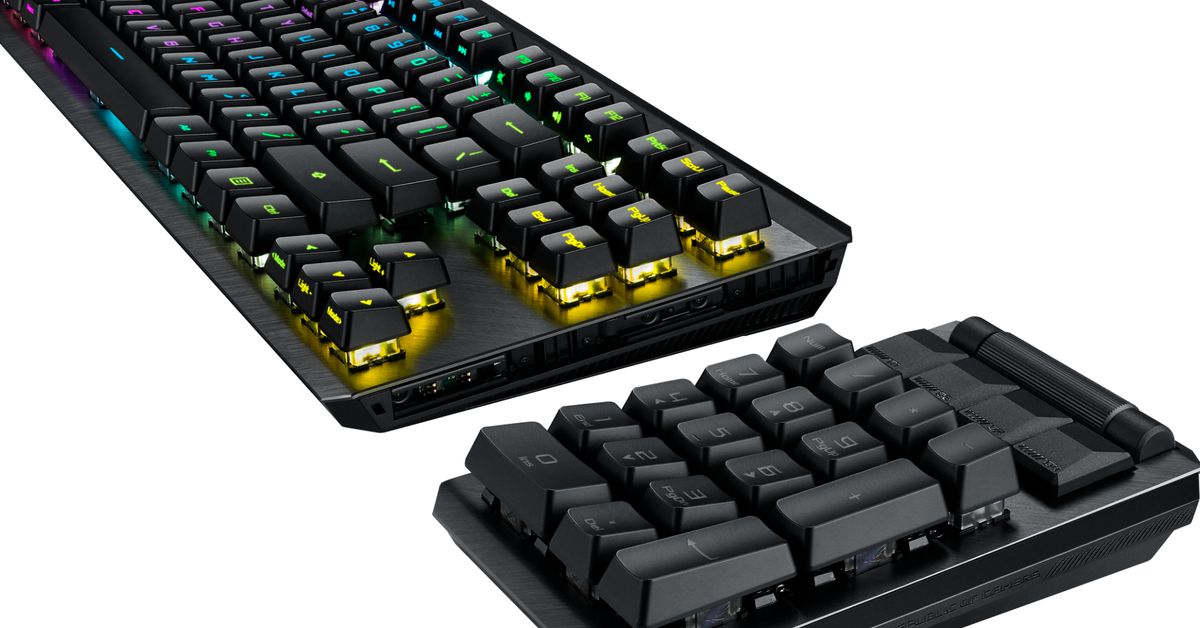 Asus announced a new mechanical keyboard at CES 2021 called the ROG Claymore II. It is designed for players, with customizable macro keys and RGB backlighting per key. It is also the first device to have Asus’ own ROG RX blue or red optical switches with a required lifespan of 100 million keystrokes.

This model gives a nod to people who just can’t quite finish the numpad: you can loosen it to make the Claymore II an 80 percent keyboard if you need to save space or magnetically attach it when you need to crush some numbers. Numpad also offers more intuitive media controls, such as a volume dial.

ROG Claymore II is connected either via a USB-C cable or wirelessly via 2.4 GHz. If you use it wirelessly, the 4000 mAh battery will last for up to 40 hours. Asus says that the USB-C port supports fast charging and USB port for other devices. This model will be released in the 2nd quarter of 2021

; Asus has not shared any price yet.

Asus has also announced its new ROG Gladius III wireless gaming mouse. The mouse does not have a final price or a specific release date (beyond the target Q2 2021), but the design and specifications are worth knowing about. Gladius III Wireless looks like the Razer DeathAdder V2, which we cited as the best wired gaming mouse to buy. The new device’s sensor supports up to 19,000 DPI, and it can be connected with a cord or wirelessly via 2.4 GHz or Bluetooth. Asus says that a pure wired version of this mouse will be released at some point.

In particular, the ROG allows Gladius III switches that can be replaced by the user, so you can find the right feel for your needs – even allowing you to switch between three-pin mechanical and five-pin Omron optical switches. Most people will probably never put the mice under such stress that they reach the end of the switches’ life, but having the opportunity to replace them is certainly a nice feature.