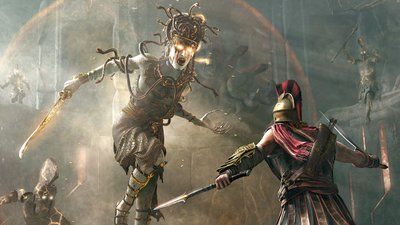 Odyssey is finally an Assassin's Creed game where I might end up loving the match. It takes what Origins did ̵

1; a much friendlier version of Dark Souls-and saves a lot of new capabilities on top of it. I figured out how this works around E3 time: you map them on the face buttons to a controller and enable them while holding down a bumper (I have not played a PC version yet, but hopefully you will be able to map them freely). These include putting your sword in fire, shielding, throwing your spear for a comfy killing and the trail-friendly Spartan-kicked, as well as a quick heal flow and powerful arrow attack.

The demo I play at Gamescom takes place later in the game, and centers on helping a girl named Bryce find her missing partner, Ligeia. All my abilities are leveled up several levels, which means I'm pretty much at endgame levels of power. I choose Alexios, the male protagonist, and I started at level 50 on the island of Lesvos east of the map.

The first goal is to protect Bryce from enemies who blame her for Ligeia's disappearance. This is where I try the fully upgraded version of the Odyssey's flyer, and read, there's something Dragon Ball Z shit. In addition to removing the shield, it sends an enemy flying. Similarly, Alexios Spartan Kick is now absurdly powerful. The result is a system that intersperses known familiar struggle with what feels superpower.

Both dodging and parrying windows are much more generous in this demo than they did on the E3 and it feels like a good choice. It keeps the flow of the battle going, and if you mistime using any of them, you will still sustain great damage and must use the dedicated healing ability.

I die three times in this demo and adjust back to using the different abilities. I like this because in Assassin's Creed, before Origins, there was not much battle worth learning, as well as counter-attacks (maritime struggle aside). Here are so many movements in your repertoire that you have to remember the mapping of up to 12 additional skills at one time – four varied, eight close combat.

Once I've hung on it, the fighting has great significance in the Odyssey. Playing without shield, like in Origins, felt like a risky movement during my first hands-on, but in this building I get the reason that mating with swords and spears gives the game another exciting rhythm. It's still not quite a best-in-class melee combat system, but it's beautifully animated, exciting and challenging.

I can not remember enjoying a good game so much in Assassin's Creed before and the increased levels of fighting skills mean that this central part of the game feels senseless different from the E3 demo; seen earlier on. If the Odyssey is actually going to be longer than Origins, it's important to reflect on that progress.

It turns out that Bryce's story really is about Medusa, which seems to be responsible for the disappearance of the partners. Alexios and Bryce go into the fossilized forest, a gray, cruel space full of bodies that have turned to stone. When I arrive at Medusa's temple, I am keen to find a special spear from a mercenary who claims to have hit her. The game gives me a rough place that he is on top of a mountain, and I beat him in battle to take it.

When I enter the temple, I follow Bryce's voice to find Medusa. My client, unfortunately, becomes rock before Alexios can do anything about it. After two deaths, I work out how to beat Medusa, who is primarily attacking her extremely burning stone casket and by killing fiery soldiers to attack. It's not the best part of the demo, though Medusa is a cool look, strange enemy, but the logic of the boss is not bad and it's a healthy try and mistake in finding it.

If you wonder how Medusa creeps into Assassin's Creed Lore lineup, it's a nice explanation here that I will not destroy – It's not a bit of Animus-laughter as superbosses in Origins. Average boss struggle aside, but in this demonstration, Odyssey feels like an effective expansion of what last year's Assassin's Creed ruled out in a place that clearly has plenty of potential.