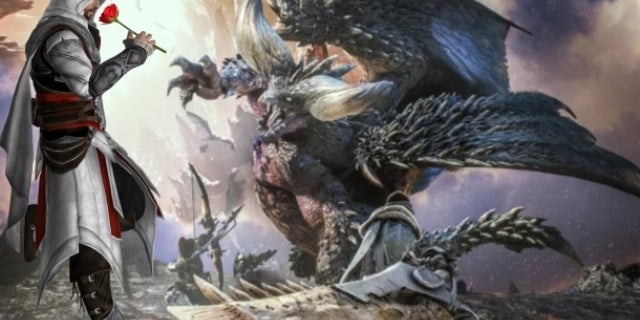 Monster Hunter World is now stranger to epic crossover events, but the latest one is that nothing is true and everything is permitted . That's right! Assassin's Creed has officially invaded the incredible RPG experience from Capcom.

Players of the RPG will be able to score some limited-time only gear – including a way to look like Ezio himself – through a new quest called "SDF: Silent, Deadly, Fierce." As a new quests go, this one is actually pretty easy. There will be a special arena where they will face three huge monsters: Lunastra, Deviljho, and Odogaron.

Take all three of these baddies out, and a unique item called Senu's Feather will be awarded. Collect three to start your journey as a member of the Brotherhood!

For those who are suckers for solid stats, there is a small downside. The new "Bayek Layered Armor" from Assassin's Creed Origins doesn't actually contribute anything mechanically, it's purely cosmetic. That being said, it sure is pretty!

That being said, there is an Assassin's Hood that offers more than just a sweet new look. For those who craft Ezio's hood, there's a pretty incentive-worthy buff involved. According to this item's description, "Increasing speed and allowing you to hide quicker. Lasts until you deal damage to a monster caught unaware. ”

What do you think about the latest crossover gear to land in Monster Hunter World? Join in the conversation in the comment section below, or hit me up on Twitter @ DirtyEffinHippy for even more gaming goodness!

For more about the game itself:

"Welcome to a new world! Take on the role of a hunter and slay ferocious monsters in a living, breathing ecosystem where you can use the landscape and its diverse inhabitants to get the upper hand. players, and materials collected from fallen foes to craft new gear and take on even bigger, badder beasts!

"As a hunter, you'll take on quests to hunt samples in a variety of habitats. Take down these samples and receive materials that you can use to create stronger weapons and armor in order to hunt even more dangerous monsters. "