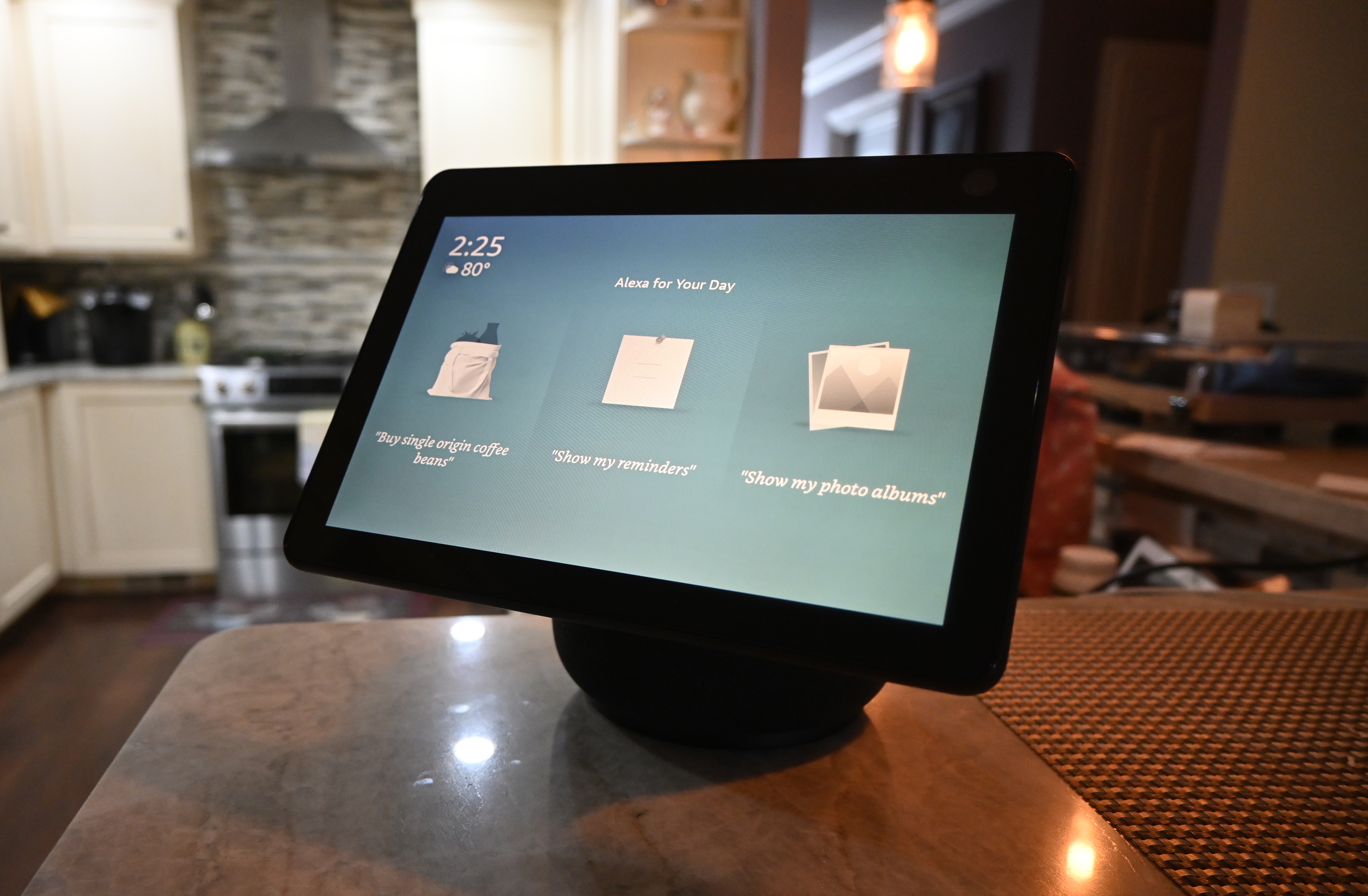 The products selected are selected independently by our editorial staff, and we can earn a commission on purchases from our links; the reseller may also receive certain auditable data for accounting purposes.

The Amazon Echo Show has always struggled with a mild identity crisis. Until now, it has been easy to write it off as an “Amazon Echo with screen”, although new models in different sizes have appeared in the last couple of years.

But the company has taken a big leap forward with the third generation Echo Show 10. Its fresh design, and Amazon’s continued focus on improving the overall user experience has made this smart speaker feel fresh, and stand out in a crowded field.

As they say, the third time is the charm. 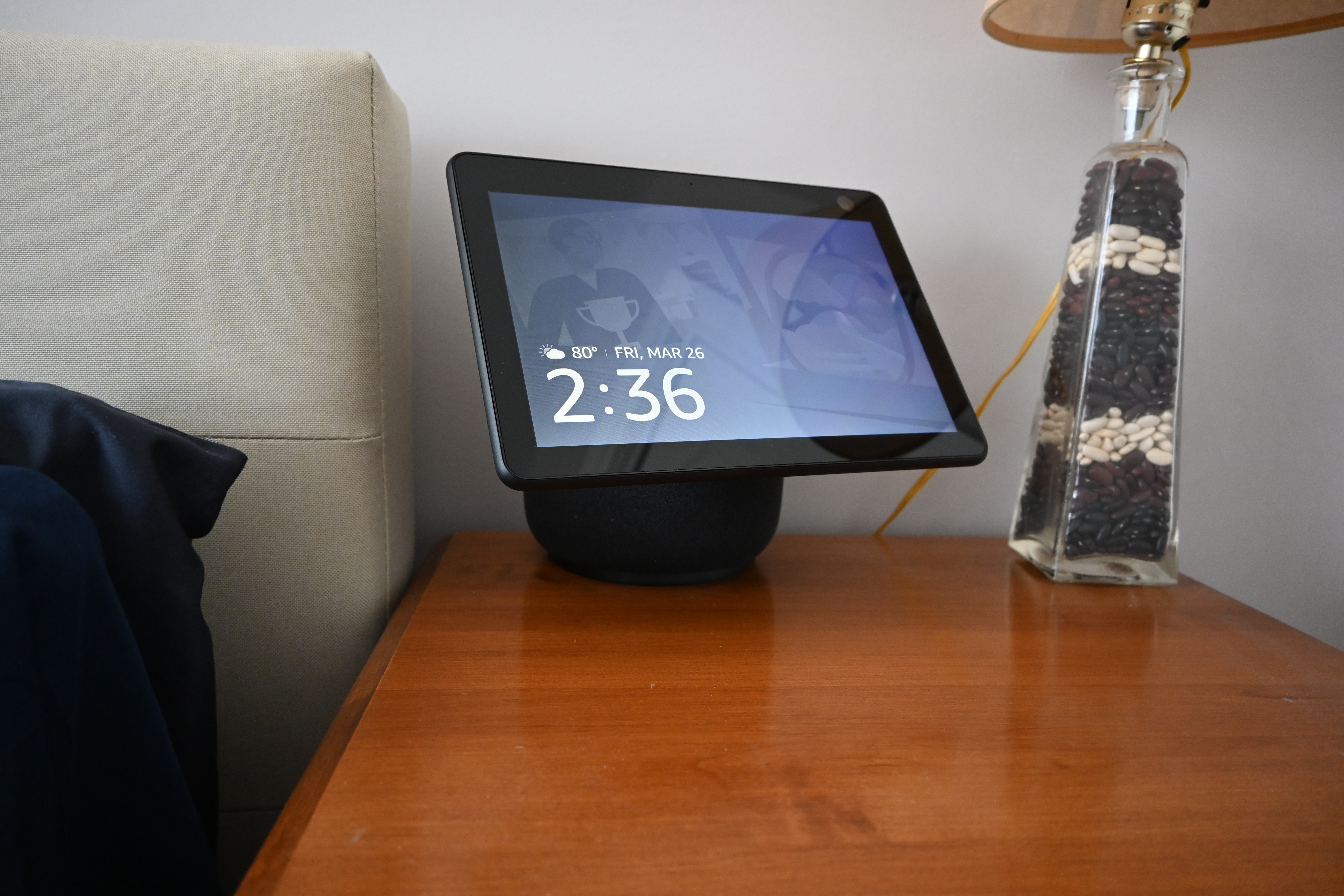 The first thing you will notice about the Echo Show 10 (3rd generation) is its new design. The 10-inch HD screen is attached to a base that looks like a smaller version of the Echo Studio speaker. This new look feels modern and lifts the screen from the ground, making it easier to see while standing up. I’ve tested a couple of generations of the Echo Show, and this is a very welcome improvement.

Amazon did not make this change just for aesthetic reasons, it’s because the Echo Show 10 base can rotate, keeping the screen pointing at you at all times. This feature is enabled by the Echo Shows 13 megapixel camera, which can track your movements and turn the smart speaker towards you.

In my experience, this feature worked surprisingly well. The Echo Show would adjust in real time as I walked around it, stopping when I stopped, and continuing when I made my next steps. If you are concerned about privacy, do not worry, you can disable this feature completely by closing Echo Show’s physical camera shutter. 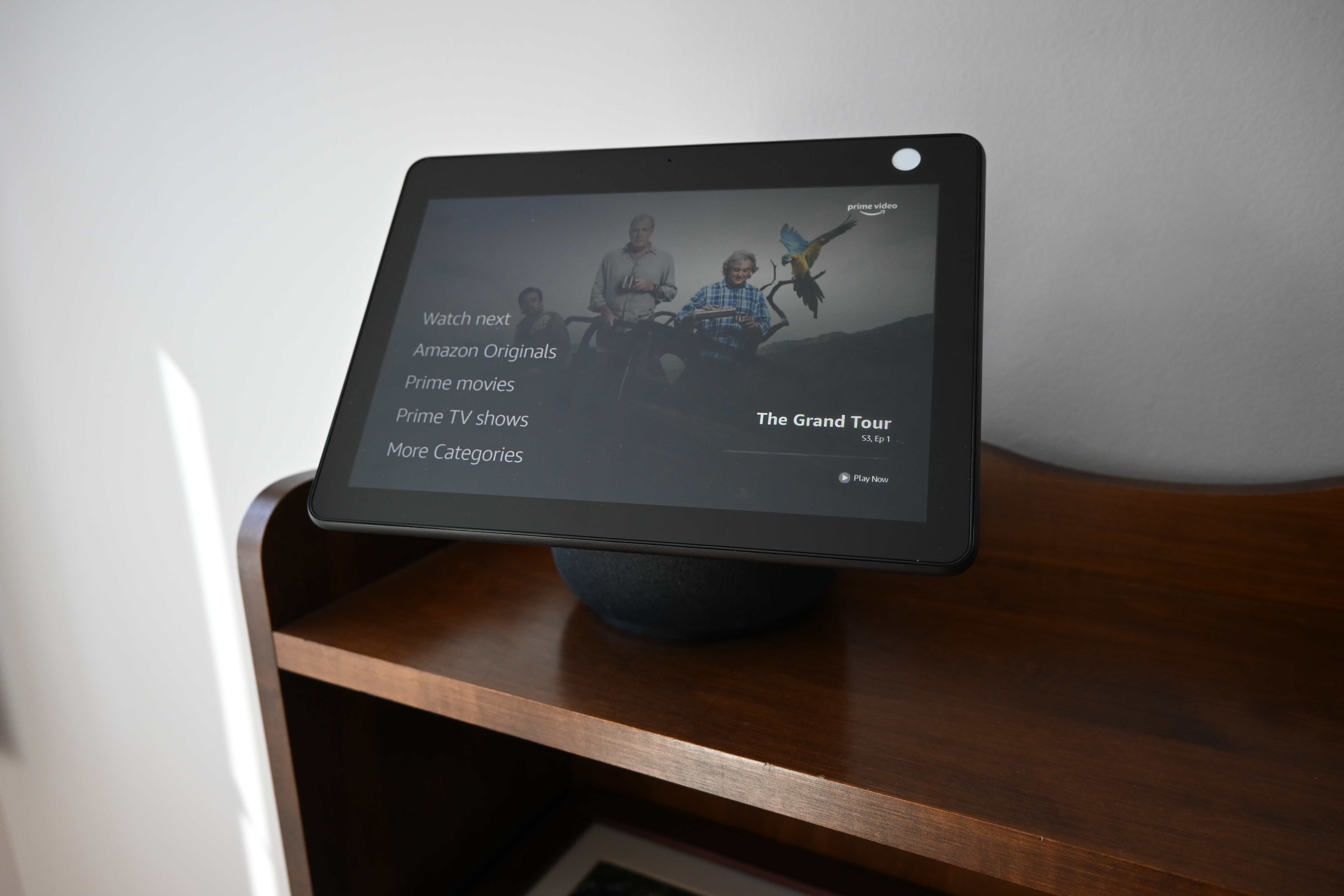 The Echo Show’s rotation feature was designed to support two of the device’s great features: watching videos and making video calls. I’m waiting for an Amazon update that promises support for video calls over Amazon Chime and Zoom to test that feature, but have some experience watching videos on the device.

I must admit that it was very helpful to keep videos in the frame while I walked around the kitchen collecting and washing the dishes, and a better experience than trying to find the right place to support my phone. Amazon’s smart speaker comes with pre-installed apps for services like Netflix and Hulu, so you can ask Alexa to watch your favorite shows without touching the screen.

To watch YouTube, you need to use the mobile version of Silk (Amazon browser) or Firefox. You can still say “Alexa, open YouTube”, but the experience of tapping and typing on the screen is a bit frustrating. Still, some earlier versions of the Echo Show could not play YouTube videos at all, so this is an improvement.

Overall, I’m a big fan of Echo Show 10’s new design, but wish Amazon had chosen to build in a full HD screen instead of sticking with a 720P screen. It looks good, but I noticed a clear difference in the video quality of the TV shows and YouTube clips I watched. 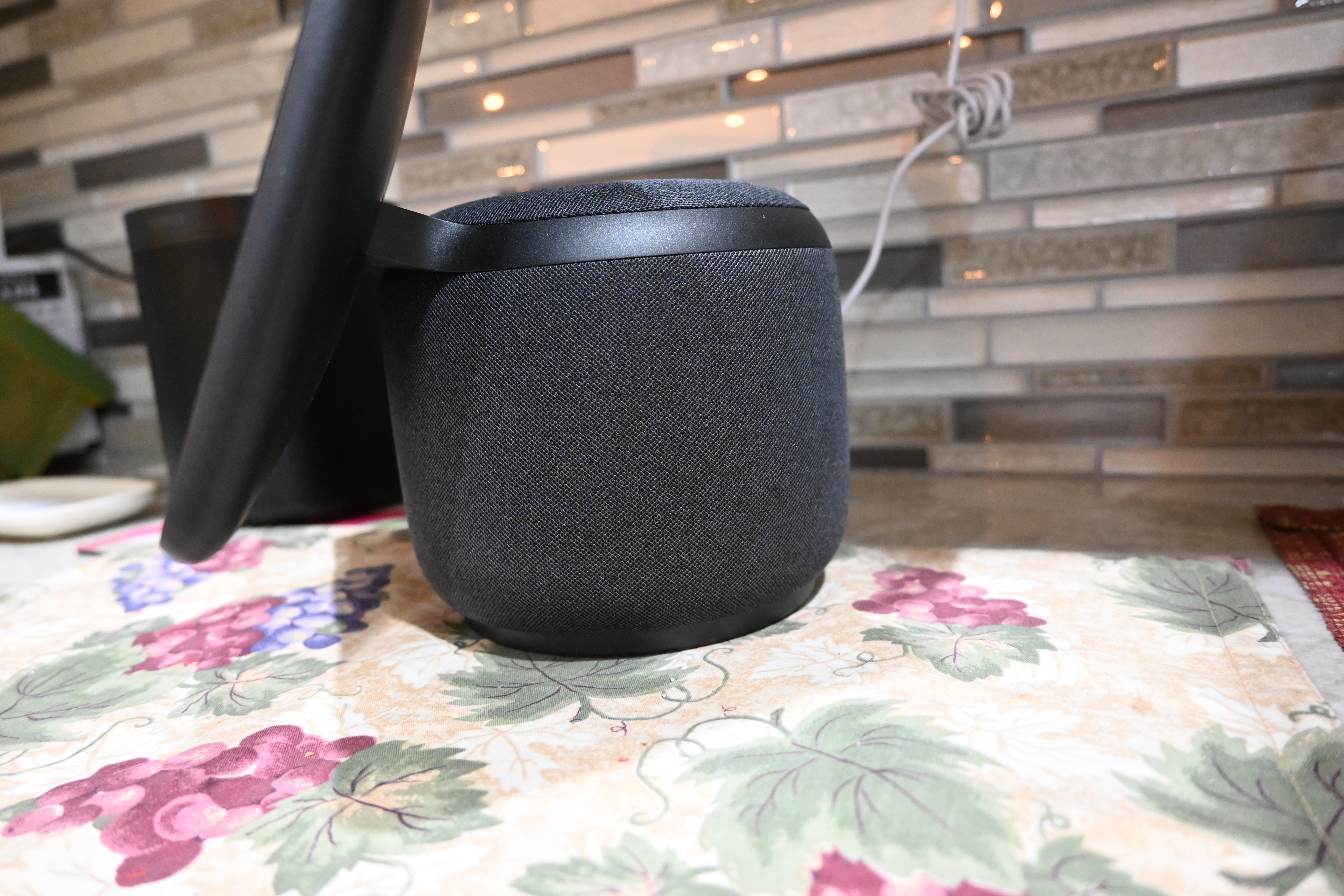 The third-generation Echo Show has the same sound system with three drivers as the latest Amazon Echo, and it delivers in a big way.

The medium-sized subwoofer and dual tweeters handled the beginnings of Led Zeppelin Stunned and confused without problems. Robert Plant’s vocals and John Paul Jones’ bass playing were both clear and distinct. The sharp guitar and synths at Pulp’s Normal people were just as clear, although the chaotic choruses could get a little muddy at the highest volume setting

I usually kept the volume at either 50% or 60% and had no trouble listening to music anywhere in a large, open kitchen. If you plan to use the Echo Show in the bedroom or office, you can probably get away with listening to around 40%. Although it’s a single speaker, the Echo Show did a pretty good job of showing stereo separation, which was a nice bonus.

Amazon used to get a lot of flakes to make smart speakers that did not sound very good, but they have taken a big leap forward recently. In the end, I actually preferred to listen to music on the Echo Show more than Echo Studio, which is aimed at audio files. One of my favorite little features is that the Echo Show shows lyrics to the song you are listening to. 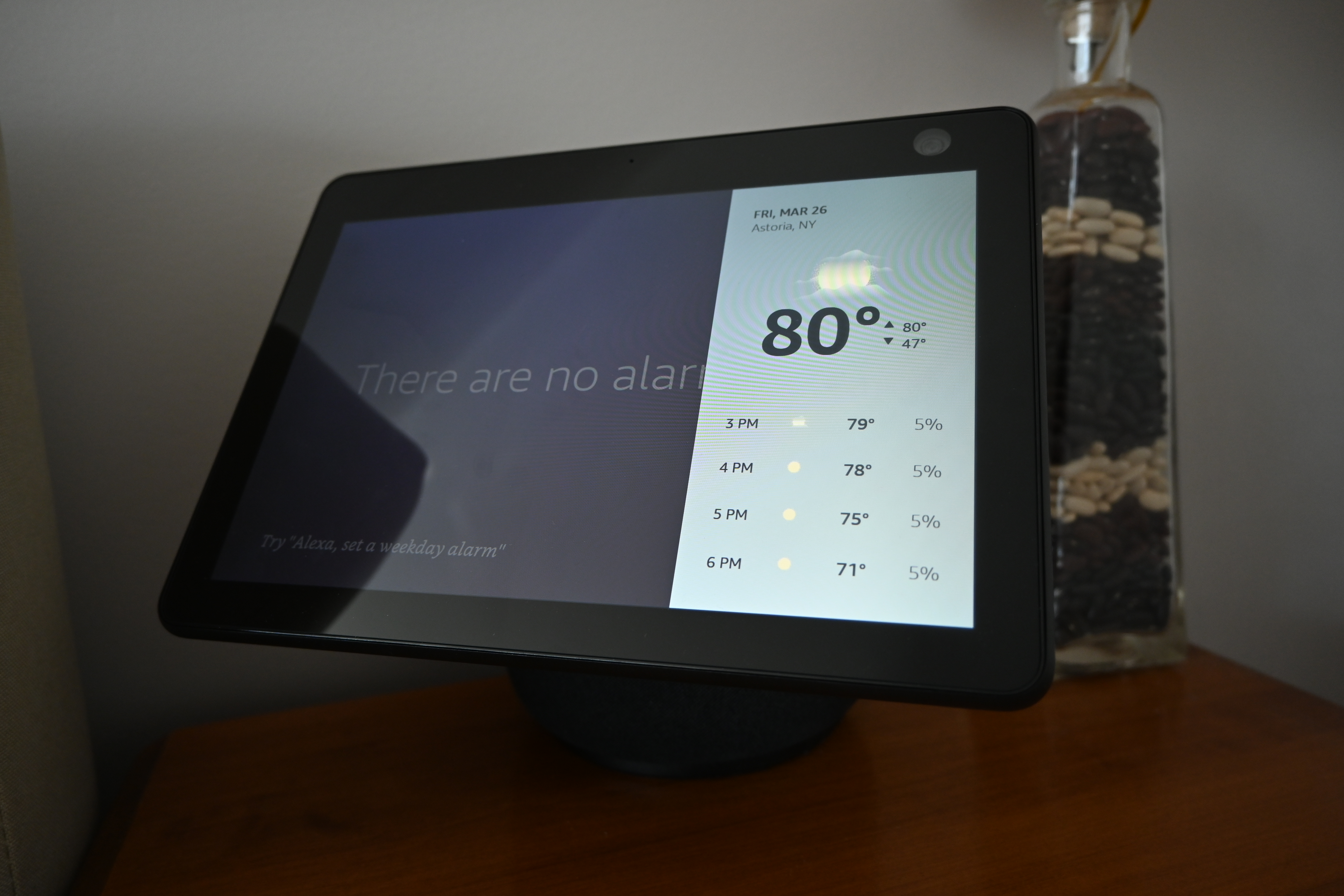 One of Echo Show’s biggest selling points is that Alexa, Amazon’s smart assistant, is so skilled. This smart speaker has a 10-inch touch screen, but I barely used it during my testing (except YouTube) because Alexa allowed me to handle almost everything hands-free.

I could set a timer, request to play a specific TV show on a streaming service (Arrested Development on Netflix and Spongebob Squarepants on Amazon Prime Video), download and install Apple Music Skill, get a news report and watch a five-day weather forecast without so much as a tap.

Alexa was so good at answering my questions, it was a little frustrating when it came short. I asked about local pizza places, and the Echo Show showed a list of local places. I followed up by asking for more information about the first restaurant on the list, and was greeted with silence. Situations like this stand out because Alexa is usually so good at getting things right.

Although I did not have to touch the screen very much, it worked very well when I did. Echo Show shows news clips with a giant play button on them, and they will start after a quick press. You can swipe down from the top of the screen to access system settings such as brightness, and to the left from the right side of the screen to set up a timer, access your music or check smart accessories for your home.

Alexa’s leadership of rival smart assistants keeps the Echo Show one step ahead of the competition. If you are shopping for your first smart speaker, this is an important point in Echo Show’s favor. It’s capable right out of the box, but you can expand the functionality by downloading third-party skills.

The point: the Echo Show (3rd generation) is the best smart speaker with a screen

Echo Show 10 (3rd generation) removes most rough edges in previous versions, while introducing some useful features along the way. It will work well anywhere, but I had the best experiences with it in the kitchen, a central place where I spend a lot of time.

It’s probably a little too big for a bedside table – that’s what Echo Show 5 is for – but it fits nicely on a medium sized desk. If you’ve been on the fence about getting a smart display speaker, and already have an echo speaker in your house, the Echo Show is a no-brainer. After spending some time on it, I can also recommend it to anyone who uses a competing smart speaker and is thinking of making the switch.