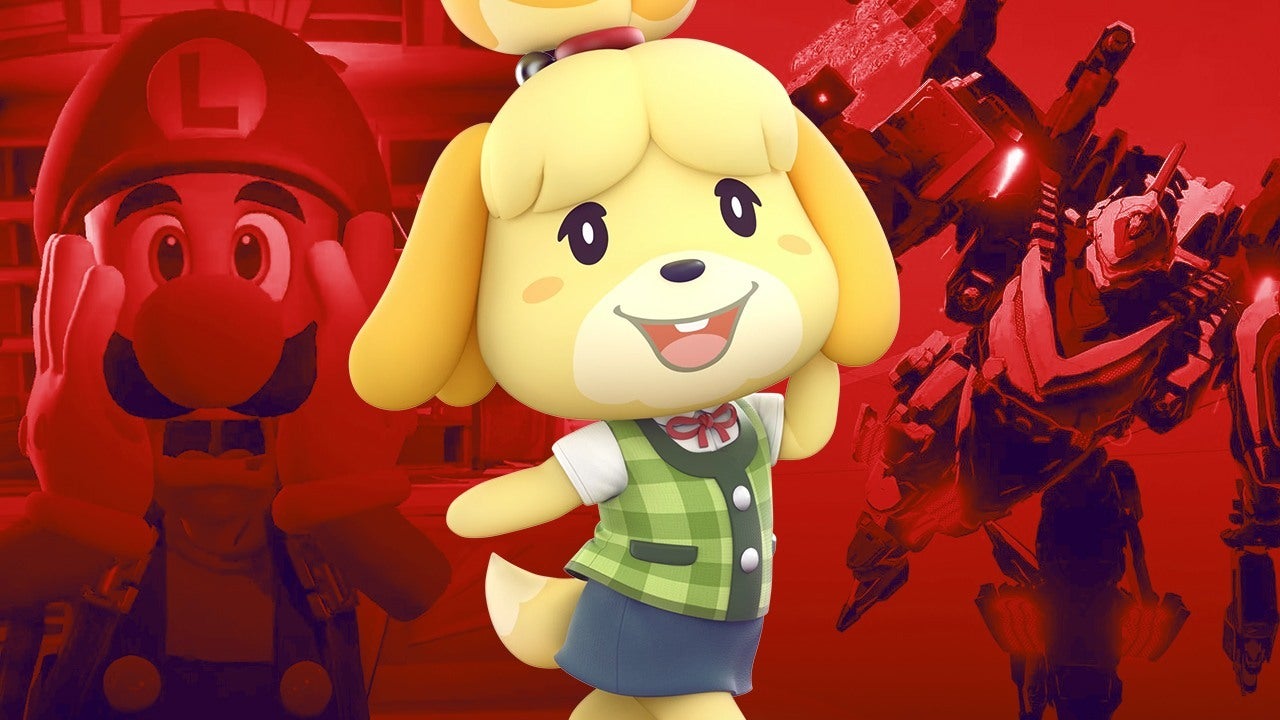 Animal Crossing, Yoshi's Crafted World, and much, much more.

Nintendo owners have much to look forward to in the new year. From a new Animal Crossing and Luigi's Mansion 3 to the next proper entry in the core Pokemon RPG series, there is no shortage of exciting first-party exclusions confirmed for release on the platform in 201

9. Plus, with titles like Bloodstained: Ritual of the Night and Mortal Kombat 11 set to arrive this year, there are plenty of prominent third-party titles on the not-too-distant horizon as well.

Read on for a look at some of the biggest titles confirmed for release on Switch in 2019. Please note this list has been kept to games that have been announced to arrive this year. As such, titles with release windows — like Bayonetta 3, Metroid Prime 4, and Shin Megami Tensei V — have not been included. We also found that the games were almost full of games, so you will not find the classic of Final Fantasy games either.

Nintendo isn't quite done by bringing Wii U games to Switch. During its direct broadcast this September, the company announced New Super Mario Bros. U Deluxe is coming to the handheld / console hybrid in January. The enhanced port features the base game, along with New Super Luigi U. In addition to 164 levels across the two core game modes, New Super Mario Bros. U Deluxe also features Coin Battle, Boost Rush, and Challenge modes

While Tales of Vesperia was released back in 2008 for Xbox 360, An updated version with additional content came to PS3 the following year, but it never made its way outside of Japan. Now, nearly a full decade later, the added content will be available in the West on Switch (as well as PS4, Xbox One, and PC) in the form of Tales of Vesperia: Definitive Edition.

After two outings on Wii, Travis Touchdown returns in a top-down action game called Travis Strikes Again: No More Heroes. The Switch exclusive sees Travis braving his way through various video games — filled with different action, racing, and puzzle challenges — squashing bugs along the way. The game features multiple collaborations with indie studios, including Shovel Knight developer Yacht Club Games. Those looking to play with a friend will be pleased to know it also has two-player co-op support.

Following its launch in Japan last year, Steins; Gate Elite is making its way to the west in 2019. This updated version of the popular 2009 Japanese visual novel Steins; Gate features added footage from the 2011 anime series, along with new animated scenes not featured in the TV adaptation. While initially slated to be released in the west in 2018, Steins; Gate Elite will be available on Switch and PS4 in February, and PC sometime in the early part of 2019.

Unveiled at E3 2018, Trials Rising is the next main entry in Ubisoft's motorcycle-focused action series, following 2014's Trials Fusion and the 2016 spinoff Trials of the Blood Dragon. While the game is also coming to Xbox One, PlayStation 4, and PC, developer RedLynx charges IGN at E3 the game plays "perfectly" on Switch. Trials Rising features various locations from around the world, including the Great Wall of China, Mount Everest, and the Eiffel Tower

The next entry in NetherRealm Studios' awesome fighting series was released last month at The Game Awards, and, surprisingly, in addition to coming to Xbox One, PlayStation 4, and PC, Mortal Kombat 11 is also making its way to Nintendo Switch. While the reveal trailer did not feature any actual gameplay, the absolutely brutal battle depicted between Scorpion and Evil Raiden makes it clear Mortal Kombat 11 will feature all of the blood and gore fans come to expect from the series.

Super Meat Boy Forever has evolved quite a bit since it was revealed as a touch-focused mobile game in 2014. In the years that followed, the project morphed into a proper sequel to the indie platformer that made its debut on Xbox 360 in 2010. Super Meat Boy Forever sees Meat Boy and Bandage Girl on a mission to rescue their child Nugget from the clutches of Dr. Fetus. The game features a two-button control scheme, as well as randomly-generated levels that scale to the skill of the player.

Sonic and his pals Return to the track this May in Sonic Sonic Racing, a new kart racer from developer Sumo Digital, the same studio behind Sonic & SEGA Racing and Sonic & All-Stars Racing Transformed. The game will feature roster of 15 playable characters, a variety of map customization options, and support for both online multiplayer and local co-op. While Sonic Racing was released this winter, SEGA delayed the game until mid-2019 "to deliver the highest quality experience to fans."

It's been a long time since we've had a new Fire Emblem game on consoles. Since the launch of Fire Emblem: Radiant Dawn on Wii in 2007, Intelligent Systems' strategy series has lived on handhelds, with the most recent entry being Fire Emblems on 3DS in 2015. The series will finally make the leap to Switch this spring, with the release of Fire Emblem: Three Houses. Formally unveiled at E3 2018, Three Houses will introduce new features to the series, including the ability to transition from a top-down perspective to an up-close view of the battlefield.

Like Yoshi's Woolly World before, Yoshi's first adventure on Switch is a side-scrolling platformer with an adorable craft-themed aesthetic. As the name implies, Yoshi's Crafted World has a hand-crafted feel, with levels made of cardboard, construction paper, buttons, and other household items. Adding an interesting wrinkle to the platforming and puzzles, players have the ability to rotate the perspective as they traverse the game's colorful world.

Sonic isn't the only one one getting a kart racer on Switch in 2019, as a new and improved version of Crash Team Racing is headed to Nintendo's platform (as well as PS4 and Xbox One) this June. The game, titled Crash Team Racing Nitro-Fueled, is being developed from the ground up by Beenox, the studio behind several of Activision's Spider-Man games. All of the tracks and characters from the original CTR will be featured, but they will be presented with updated graphics and a remastered soundtrack.

Release Date: TBD – 2019 [19659005] Aside from the fact that a new Animal Crossing game is coming to Switch at some point in 2019 and will probably feature a bell-hungry Tom Nook, we know virtually nothing about the next entry in the series. With New Super Mario Bros. U, Fire Emblem: Three Houses, and Yoshi's Crafted World all planned to be released within the first half of 2019, with good chance the new Animal Crossing will be among Nintendo's offerings for the back half of the year. After all, we don't even have an official title for the game. Still, that hasn't stopped us from putting together things we saw from Animal Crossing on Switch

Bloodstained: Ritual of the Night

Afterwards, Konya, forms Castlevania producer Koji Igarashi, has launched a campaign to support the creation of a spiritual successor to Konami's beloved side-scrolling action franchise. That game is Bloodstained: Ritual of the Night, and while it was previously slated to launch in 2018, the game was delayed to 2019 in order to "raise the quality level." Additionally, Shante developer Wayforward has been on board to help with development. A retro – inspired title set in the Bloodstained universe called Bloodstained: Curse of the Moon did it out in 2018, though, and we enjoyed it quite a bit.

Daemon X Machina, a new mech-focused action game from Armored Core producer Kenichiro Tsukuda was announced for Nintendo Switch at E3 2018. The game features an eye-catching cell-shaded art style, as well as character designs at Yusuke Kozaki, whose previous work includes the 3DS Fire Emblem games. Daemon X Machina puts players in the shoes of a customizable character who uses a powered suit to complete various missions. The suit, referred to as an arsenal, is outfitted with different weapons you can change based on the situation.

A sequel to Dragon Quest Builders was announced for PS4 and Switch in 2017, and while the game is already out in Japan, it won't be too much before those in the west will be able to pick up a copy. Thanks to an earnings release from Nintendo last year (via Gematsu) we know the game will be released in North America and Europe sometime in 2019. Dragon Quest Builders 2 will feature several new additions, including four-player multiplayer, the ability to dive underwater

Surprising everyone at The Game Awards, Koei Tecmo and Nintendo announced a new Marvel Ultimate Alliance game, and is coming exclusively to Switch in 2019. Title Marvel Ultimate Alliance 3: The Black Order, the Game is being developed by Team Ninja and looking up to four players on a mission to take down Thanos and The Black Order. The game will feature drop-in / drop-out co-op, with both online and offline support. Nintendo of America president and COO Reggie Fils-Aime cited the company's history and strong working relationship with Koei Tecmo on titles like Hyrule Warriors and Fire Emblem Warriors.

Revealed last month at The Game Awards, Sayonara Wild Hearts is a new game from Year Walk and Device 6 developer Simogo and Annapurna Interactive. In addition to an eye-catching art style, the music-based game features custom pop songs that work in harmony with its gameplay. As a masked biker known as The Fool, players will ride skateboards and motorcycles, swing swords, engage in dance battles, and more, as they traverse deserts, forests, and cities in search of balance in the universe.

Pokemon developer Game Freak is not only a new entry in the popular creature-collecting franchise; it's also got a new turn-based RPG on the horizon for Switch. Tentatively (and appropriately) titled Town, the entire game takes place in a single village. When monsters appear, it's up to you and fellow townsfolk to restore peace. During the game's turn-based battles, you'll be able to summon people from the town to assist you in combat.

Let's Go, Pikachu! and Let's Go, Eevee! may have been the first Pokemon role-playing adventures on Switch, but the next mainline installment — presumably Generation 8 — has yet to come. While we know very little about the next core entry in the series, The Pokemon Company confirmed it's coming in late 2019. Pokemon director, producer, and composer Junichi Masuda is directing the title and said it will "follow in the tradition of Pokemon X and Y and Pokemon Sun and Moon. "